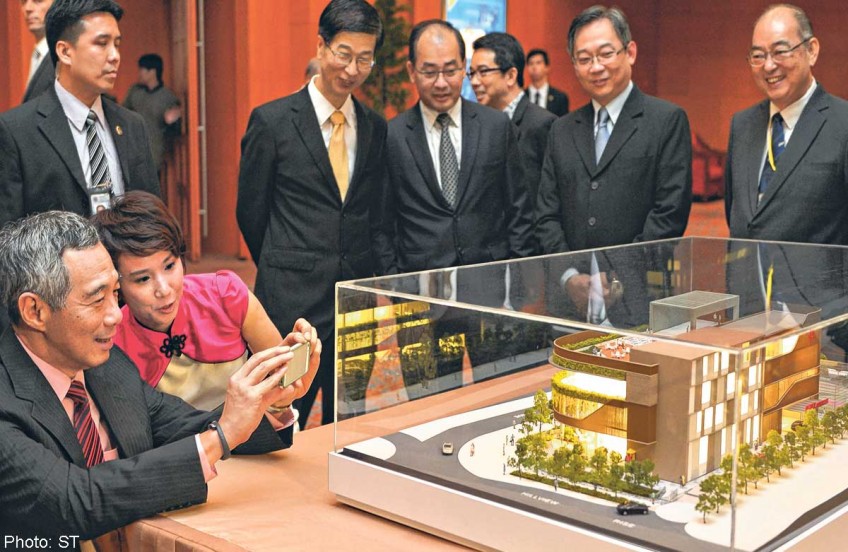 Prime Minister Lee Hsien Loong taking a photo of the model of the new Bukit Gombak Community Club, with Ms Low Yen Ling, Parliamentary Secretary for Culture, Community and Youth and MP of Bukit Gombak looking on. Health Minister Gan Kim Yong (second from right) was also at the event.

Bukit Gombak will soon get a new community club (CC) designed based on suggestions from some of its 45,000 residents. Expected to be ready in the last quarter of 2016, the CC will have features such as a vertical green wall, a community spice garden and irrigation using recycled rainwater.

The new four-storey building will be located next to a retail and residential development along Hillview Avenue, where the old Hillview CC once stood.

The old CC, which dates back to the 1970s, was moved to the void deck of Block 386 Bukit Batok West Avenue 5 about 10 years ago. "To many, the CC was like a second home," said MP for the ward, Parliamentary Secretary for Culture, Community and Youth Low Yen Ling, at a dinner last night to raise funds for the new CC.

That was why her grassroots team made the extra effort to consult residents on what they hope to see in the new CC, she said. They surveyed almost 1,000 residents last year and the CC was designed based on their feedback. For instance, the idea to recycle rainwater for irrigation had come from residents.

Ms Low said the eco-friendly features of the new CC reflect the greenery and unique natural features of Bukit Gombak. There will also be other amenities to meet residents' interests and needs, such as a culinary studio, childcare centre and dance studio.

Prime Minister Lee Hsien Loong was the guest of honour at last night's fund-raising dinner, which was attended by over 1,000 donors, grassroots leaders, and residents. Some $2.16 million was raised at the event.

Ms Low, who is also South West District mayor, said she hopes the new CC will become a "new focal point" for residents to gather and bond.