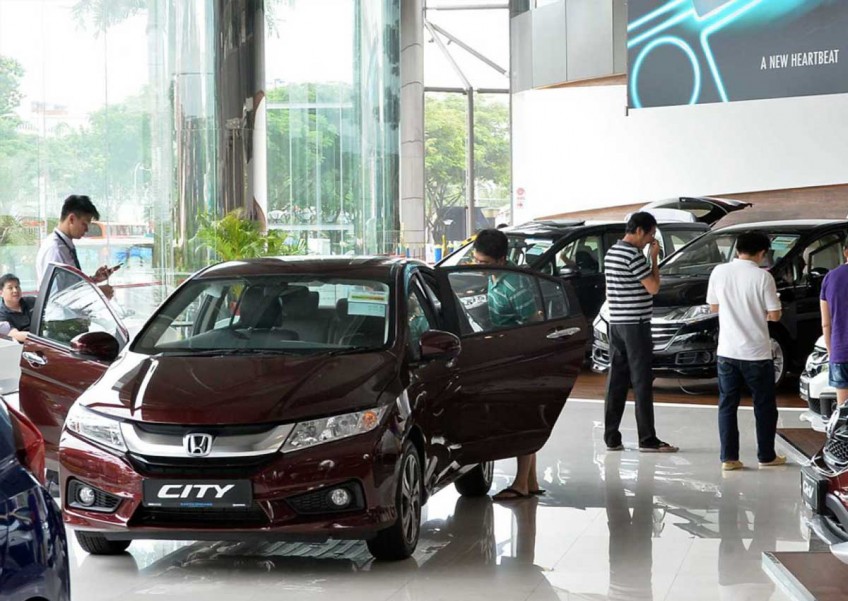 How the new VES will affect price can be illustrated with Honda's Odyssey MPV with a 2.4-litre naturally aspirated engine. It is now in the neutral band, but under VES, it will be slapped with a S$10,000 surcharge.
Berita Harian

The new Vehicle Emissions Scheme (VES) will inevitably push car prices up but for now, some dealers are facing uncertainty over actual vehicle pollutant levels because these need to be confirmed with the manufacturers, and also because of the impending change in emission standards for petrol vehicles.

"The additional pollutants are mainly targeting diesel cars but petrol will also have it bad," said a spokesman for Komoco Motors, the authorised Hyundai distributor. "Models in the market which currently enjoy a rebate may fall into the surcharge territory."

He added: "Diesel cars will no longer enjoy rebates but across the board, the rebate level has dropped and the CO2 limit has been lowered."

CEVS's nine bands for cars and taxis will collapse into five under VES, with two rebate/surcharge bands and one neutral band.

As a result, all diesel models are "badly affected", lamented an executive at a dealership. An example: a 2.0-litre turbodiesel sedan's S$10,000 rebate will become a S$20,000 surcharge. "All because of NOx (nitrogen oxide); PM (particulate matter) is not so bad," he said.

As for petrol cars, VinCar's Honda Vezel hybrid, which now attracts the highest S$30,000 rebate, will still qualify for the maximum rebate under the new scheme but only S$20,000.

Komoco also has a hybrid model, the Hyundai Ioniq, and it should still qualify for the maximum rebate under VES, said the spokesman. But he added that this is based on a preliminary check and requires official confirmation from the factory.

While a lower or no rebate should lead to higher sticker prices, Nicholas Wong, general manager of authorised Honda distributor Kah Motor, said that much depends on the COE levels.

"Most models will fall from S$5,000 into the neutral band because of the tightening but if COE premiums drop, then overall prices will not be higher," he explained.

"We still have eight or nine months to react but moving forward, it will be very difficult to own a big car."

As an example, the Honda Odyssey large MPV with a 2.4-litre naturally aspirated engine is now in the neutral band. Under VES, it will be slapped with a S$10,000 surcharge.

But even as prices are set to rise, distributors are not completely sure by how much. This is because the Euro 6 vehicle emission standard will be adopted on Sept 1, 2017. Most models sold here today are only Euro 4-compliant, with the data on pollutants based on that standard.

"Since a vehicle's VES rebate or surcharge will be determined by its worst-performing pollutant, after Euro 6 kicks in, we won't know whether PM will be the worst performer instead of CO2," Mr Wong said.

One distributor, who asked not to be named, said that there was a "rush for everyone to switch over".

"There are too many different dates at the moment," he said, referring to Euro 6 implementation for petrol in September but Jan 1, 2018 for diesel. "We still have to request the manufacturers for the data and the wait can last a couple of weeks or a couple of months. But we don't have the luxury of time because homologation takes two to four months."

This article was first published on Mar 10, 2017.
Get The Business Times for more stories.