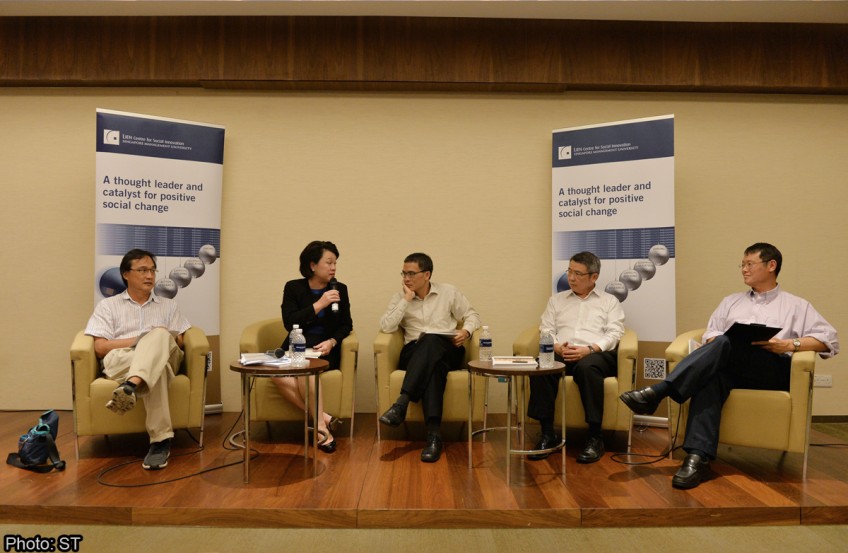 Panel speakers (L-R) Yeoh Lam Keong, Vice President of the Economic Society of Singapore, Gillian Koh, Senior Research Fellow at the Institute of Policy Studies, Laurence Lien, Chairman of Lien Foundation, Tim Oei, CEO of AWWA and moderator Tan Chi Chiu, Chairman for the Lien Centre for Innovation, at the launch of a handbook on 'Inequality, Poverty and Unmet Social Needs in Singapore' by the Lien Centre for Social Innovation, on 17 March 2015.

POVERTY is a problem in Singapore that is under-appreciated, said panellists at a discussion this week on the subject and issues of inequality.

"Poverty is well-hidden because we have such wonderful Housing Board flats but, sometimes, many things happen behind closed doors and are not evident to people," said Lien Foundation chairman Laurence Lien.

To equip more Singaporeans with the knowledge to understand and debate these issues, the Lien Centre for Social Innovation launched a handbook on Tuesday.

The 83-page book is a compilation of research and policy ideas on the issues raised over the years by 30 experts and academics. It can soon be downloaded from www.lcsi.smu.edu.sg.

As there is no official definition of poverty in Singapore, the panellists said the poor are people who struggle to meet such basic daily needs as food, rent and transport.

The Government provides three main permanent schemes for the needy.

One is the Public Assistance programme that gives social aid to about 3,000 of the poorest households.

Another is the Workfare scheme that supplements the income of about 480,000 low-wage workers.

And from early next year, the Silver Support programme will give cash payouts for life to about 150,000 of the poorest among the elderly.

The recent government measures were acknowledged by the experts. But more can be done, they added, urging the Government to give more detailed data on poverty.

For example, official data tend to be sorted by income level and housing type, but could be further sorted by specific neighbourhoods, said the book's authors.

With more data, more studies can be done, said Mr Lien. He noted that studies on the mental burden financial stress places on the poor have been done in countries such as the United States and India, but not in Singapore.

But panellist and Institute of Policy Studies senior research fellow Gillian Koh said the onus to act is not on Government alone. Individuals, communities and civil society can also play a part in tackling poverty, she added.

For example, some social behaviour just cannot be mandated by law. Social welfare groups can step in and say, encourage men to transfer some of their Central Provident Fund savings to their non-working wives, she said.

But to do so, these groups need more data, said Mr Tim Oei of the Asian Women's Welfare Organisation.

It can help find solutions for the deeper causes behind poverty.

"The debate on poverty is not just about experts deciding what poverty thresholds are. Citizens also need to participate," said Mr Lien.

"This is the start of conversations on what else needs to be done."