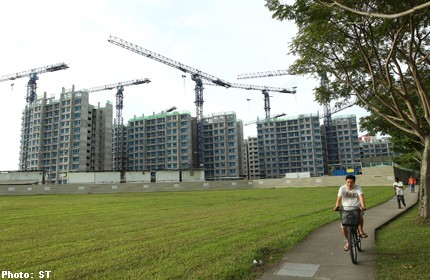 In the National Day Rally on Sunday, PM Lee defied the expectations of some who thought the Government would announce a radical move to lower Build-To-Order prices. He said its strategy is to use more grants to bring down the effective costs of flats, rather than change how they are priced.

SINGAPORE - Civil servant Titus Seah, 26, and his girlfriend are rethinking their flat application after the National Day Rally.

This is because Prime Minister Lee Hsien Loong had announced a new grant of up to $20,000 for buyers of three- and four-room flats. Previously, this Special Central Provident Fund (CPF) Housing Grant was only for low- income buyers of small flats.

Mr Seah and his girlfriend, who together earn $7,000 a month, say that could make a difference to their flat purchase.

"Twenty thousand dollars is a significant subsidy and it would sway our decision to buying a four-room instead of a five-room flat," he said.

But such thinking is why observers said on Monday that the new grant must come with an income ceiling that limits it to lower-middle income buyers.

International Property Advisor chief executive Ku Swee Yong said the cap should be $4,000 - as in Mr Lee's example on Sunday to illustrate how the grant will help a family buying a four-room flat - because "the intention is to help those who are at risk of not being able to afford a flat".

Research head Nicholas Mak of SLP International said the cap should be from $4,000 to $5,000, as anything higher would lead to an "over-consumption" of four- room flats, the most popular flat type. "It's better to start with a low income cap, then raise it later if needed, than to start high and try to bring it down later."

The Special CPF Housing Grant is now given to buyers with monthly incomes of not more than $2,250. It is tiered such that the full $20,000 goes to only those earning $1,500 or less.

Observers said the expansion, in encouraging some buyers to stick to three- or four-room flats, is aimed at discouraging lower- middle income buyers from over-stretching themselves.

"The message was clear to buyers: Work within your means," he said. "He was saying that the Government will help you upgrade later on, so don't over-commit yourself for your first flat."

The message of financial prudence also emerged when Mr Lee used a 25-year loan tenure in his calculations, rather than the more common 30 years, some said.

"This is a step in the right direction," said Institute of Policy Studies research associate Christopher Gee. "In the late 1980s, mortgages were only 15 to 20 years. Now, they are at a point where they consume your entire working life."

On Sunday, Mr Lee also said a shorter tenure would mean that incomes in later years can be used to boost retirement savings.

He defied some expectations that the Government would announce a radical move to lower Build-To-Order prices, such as through shorter leases. Instead, he said its chosen strategy is to use more grants to bring down the effective costs of flats, rather than change how they are priced.

"Direct grants to home owners are less complicated than interfering with the supply side of the housing market," noted Nanyang Technological University economist Walter Theseira. "The Government may be the biggest supplier of public housing, but it cannot let the bottom fall out of the market as that would anger too many people."