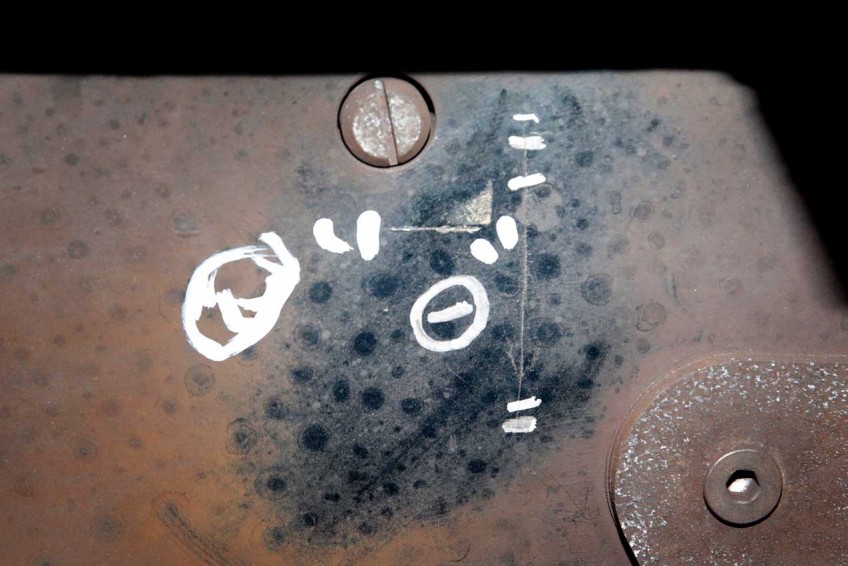 A hairline crack (vertical line marked '1') measuring just under 5cm seen on the carbody bolster of the recalled train at Bishan depot on July 12, 2016.
The Straits Times

All new MRT trains assembled by a Chinese rolling stock company in Qingdao, not just the 26 defective ones, will have a key component cast in Japan instead of China, the Land Transport Authority (LTA) said yesterday.

The defective trains were found to have hairline cracks - which the authority said did not pose a safety risk - on the bolsters, an aluminium alloy structure under the train cars.

Since 2014, the affected trains have been progressively shipped back to Qingdao to have their car bodies replaced, along with new bolsters cast by Japanese supplier Kobe Steel instead of China's Longkou Chonglin. As the trains ordered in 2009 for the North-South East- West Lines (NSEWL) are still under warranty, shipping and rectification costs are borne by the supplier.

The LTA said defects in the manufacturing process by Longkou Chonglin resulted in impurities being introduced in the aluminium material, leading to the hairline cracks developing over time.

These cracks were found during routine inspections in July 2013, more than two years after the trains were put into service, and after they had each clocked an average of about 300,000km.

About 85 per cent of the cracks are shorter than 20cm, with the longest between 40cm and 50cm.

Computational tests found that despite the defects, the bolsters could still withstand pressure loads of more than three times the maximum measured levels on the system.

Although this is less than the 3.7 times the bolsters are designed to withstand, it is still a high safety margin, said LTA deputy chief executive Chua Chong Kheng. "We insisted that they change the supplier for this particular bolster, notwithstanding that it was a manufacturing process error."

To date, five of the 26 defective trains have been rectified and one is in Qingdao undergoing rectification. The other 20 continue to be used on the NSEWL and the cracks are closely monitored by the LTA.

Mr Chua said Kawasaki Heavy Industries, part of the Japanese-Chinese consortium that won the contract in 2009 to supply the trains, had selected Kobe Steel to provide the bolsters.

Under the rectification work - which takes around four months for each train - all six car-body shells of each train, along with its 12 bolsters, will be replaced.

While the bolsters, which are welded to the car-body shells, will be made in Japan, the car bodies will continue to be made by China Southern Railway Sifang, which is also responsible for assembling the trains.

Kawasaki is the lead contractor responsible for the design and procurement of parts such as the brake.

After news of the train defects broke last week, questions were raised as to why the LTA chose to still procure trains from the Kawasaki-Sifang consortium, which won a $749 million tender in 2014 to supply 91 four-car trains for the upcoming Thomson-East Coast Line.

Mr Chua explained that through the tender process, which drew five other bidders, the LTA found that Kawasaki-Sifang delivered the best proposal in terms of quality, price and life-cycle costs. He said that with the ongoing rectification work for the 26 trains, and the willingness of Kawasaki-Sifang to honour its obligations, the hairline-crack issue has been "put to rest".

"We are very confident of that because the new bolsters will also be coming from Japan, Kobe Steel."

This article was first published on Jul 13, 2016.
Get a copy of The Straits Times or go to straitstimes.com for more stories.