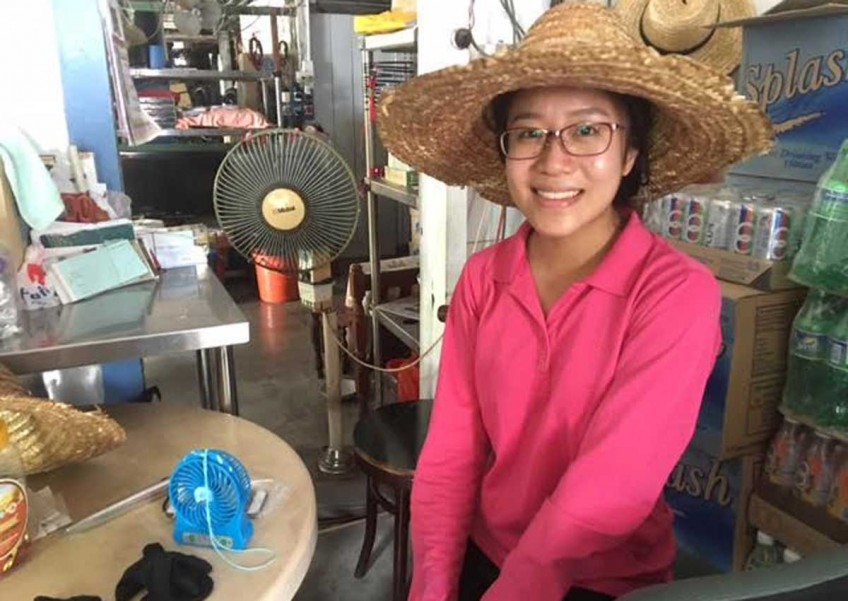 Ms Emily Chia visits Pulau Ubin three times a week and has been doing so for the past 20 years.
AsiaOne

She hops onto a ferry to Pulau Ubin three times a week, and has been doing so for the past 20 years.

To date, Ms Emily Chia, 26, believes her fondest childhood memories come from the little boomerang-shaped island, more commonly known to us all as Pulau Ubin.

She would often skip over to her cousins' seaside homes to splash around in the water with them.

"I remember almost drowning in the sea once, but one of my cousins saved me," Ms Chia recalled with a laugh.

And one might think that such an experience might have altered her love for Ubin, but it never did.

"Most of the time I do nothing while I'm here and I hate the weather, but it is the people and the interaction that makes me come back so often," she said.

And because the people contribute to Ubin's character and charm, the National Heritage Board (NHB) chose to embark on a year-long piece of research, involving a documentary, on the former and current residents of the island.

Titled the Pulau Ubin Cultural Mapping Project, a team of researchers spearheaded by Dr Vivienne Wee made it their prerogative to correct the misconceptions about Pulau Ubin.

One popular misconception about the island is that it has only 39 people.

However NHB's Assistant Chief Executive Officer Mr Alvin Tan clarified: "Through field work at Pulau Ubin the team of researchers have found more than 130 residents living and/or working on the island."

And these residents seem to possess an array of unconventional skills.

Having lived in Ubin for over 70 years, Mr Ahmad has a knack for finding wells and knows how to build and repair wooden structures.

In his more agile years, he even dug wells for his neighbours. A generator is then use to carry the water to the households' taps.

Mr Tan Leong Kit is another example of a man with a distinctive skill in Ubin.

Besides owning a drink stall, the 85-year-old grows and tends to his own medicinal herb garden.

He sells herbs like the elephant's foot plant that treats health conditions like anaemia and arthritis at $150 per kilogram to occasional customers on the island.

Formerly a pig farmer, Mr Tan moved to Ubin in 1989 to rear his own pigs. But after his farm closed down, he decided to turn to another form of commerce.

Mr Tan's wife however, lives in mainland Singapore along with their eight children, 22 grandchildren and 4 great grandchildren. They often visit Mr Tan on weekends.

The stories of Ms Chia, Mr Ahmad, Mr Tan as well as other people living in Pulau Ubin, can be found in a 25-minute documentary released on Thursday (April 28) titled, "Life on Ubin".

"I think it's good that the government has decided to preserve this place. Seeing how most of us are always busy with our careers, we seldom even remember the memories we have here in Ubin," said Ms Chia.

"I prefer the lifestyle back then and think it will be good if the government continues to preserve it."

Members of the public will be able to experience Pulau Ubin's heritage for themselves in May during NHB's Singapore HeritageFest 2016.

For more information on performances and film screenings, head on to http://heritagefest.sg/.