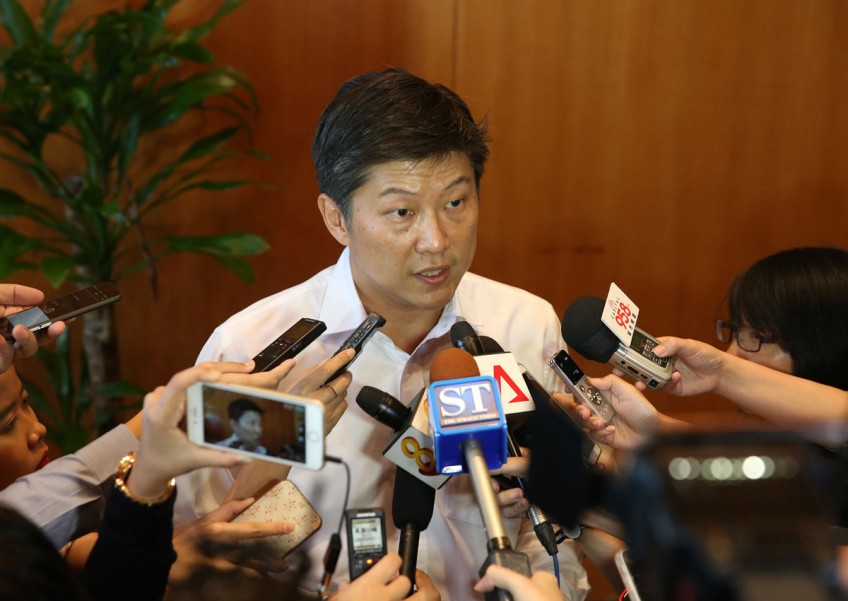 Ng Chee Meng (Acting Minister for Education (Schools) & Senior Minister of State, Ministry of Transport) gave a doorstop interview to the media on Wed 13 July at MOE, on changes to PSLE Scoring and Sec 1 Posting process.
The Straits Times

In a move to dial down the competition over the Primary School Leaving Examination and encourage pupils to go beyond book smarts, the new PSLE grading will no longer be based on how pupils perform relative to their peers.

Instead, the new scoring system, which will come into effect in 2021, is aimed at encouraging pupils to focus on their own learning, instead of the competition.

Their marks will be converted into grade bands 1 to 8 and their PSLE score will be the sum of their grades in all the subjects, with 4 being the best score.

The Ministry of Education (MOE) in its press statement said: "Students will no longer be as finely differentiated, since there will only be 29 possible PSLE Scores, compared to more than 200 T-score aggregates under the current system."

Achievement Level (AL) 1 is pitched close to the A star grade in the current system, for those scoring 90 and above. AL 2, 3 and 4 have a five point difference, while bands will widen AL 5 onwards.

MOE said the new system will still give parents and educators a gauge of a pupil's progress at the end of primary school so that they can be matched to suitable academic programmes in secondary school.

It also said that if there are too few grade levels, there would be more pupils with the same PSLE Score, which would lead to more balloting for Secondary 1 posting.

The secondary-school streams will remain - pupils with a PSLE score of 4 to 20 will qualify for the Express stream.

Posting will continue to be based on academic merit first.

But under the new system, the choice order in which a pupil lists the secondary schools will now matter more, as a tie-breaker.

Currently, when two pupils are tied for a place in a school, computerised balloting is used to award the place, regardless of where they listed the school in their order of choices.

Under the new system, the pupil who lists the school higher in his choice list will have priority.

Acting Minister for Education (Schools) Ng Chee Meng told the media that the new system of eight ALs afforded enough differentiation to match pupils to the school that suits them, but it was not so broad that there would have to be too much balloting.

It is estimated that less than one in 10 places will be subject to balloting.

In response to parents who wished that MOE had been bolder in its changes, Mr Ng said that Singapore already had a strong and robust education system that had done well over the past 50 years.

"Some things are best evolved and not revolutionalised," he said.