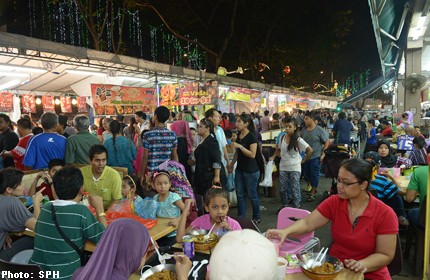 SINGAPORE - New Hari Raya bazaars in other neighbourhoods could give the traditional ones in Geylang Serai and Kandahar Street a run for their money this year.

The first indoor Ramadan bazaar is taking place at the Singapore Expo from Aug 1 to 4.

Spanning 5,000 sq m and with 150 stalls, it rivals the Geylang Serai one, which has been the go-to place for the Muslim community to do their Hari Raya shopping for items from food and clothing to furniture.

Organiser of the Expo event, Mr Yudikarma Sulaiman, said he decided to hold an indoor bazaar as he had previously faced many hygiene problems, such as cockroaches, at his outdoor bazaars in Woodlands.

"The weather was also a problem because the rain made it inconvenient for customers and led to many leaks," he said.

In a bid to attract the crowds, he has set up an entertainment area which has games and a charity auction. There will be a dining area for Muslims to break their fast, as well as a prayer room.

"If things go well this year, we could extend the bazaar period by one or two weeks next year," he said.

About 15 per cent of stalls there sell food, and the rest sell furniture, clothing and accessories.

At Tampines, this year will be the first time a Ramadan bazaar is held at a group representation constituency level. It is organised by Tampines West Community Club.

Said Ms Violet Ong, director of Tampines West CC: "Previously, there were only smaller bazaars held around Tampines at the divisional level.

"Now with a centralised location near the MRT station and bus interchange, it is more convenient for our Muslim residents, and they don't have to go all the way to Geylang Serai."

But the stalwarts are not worried. The bazaar at Kandahar Street, which originally ran along Bussorah Street, has been around since the 1960s and attracts a good crowd every year.

Its organiser, Mr Jefri Sidik, said: "Kandahar Street is like the Mecca of Singapore, because we see Muslims from all walks of life such as Javanese, Arabs and Indians coming here."

The bazaar also has an edge over the others as it almost exclusively sells food, which has been a big draw for those wanting to try different cuisines, he said.

He has seen a 20 per cent increase in the crowds since the bazaar moved off the streets and to the Bussorah Mall.

While the new bazaars are potential rivals for the traditional ones, Tampines resident Siti Raudhah Ismail remains loyal to Geylang Serai.

She thought the Tampines bazaar looked like nothing more than "a regular pasar malam".

The 22-year-old teacher said: "Nothing beats tradition. I think almost all bazaar-goers will end up visiting Geylang no matter what."