New rule at Singapore Indoor Stadium: No re-entry once you exit 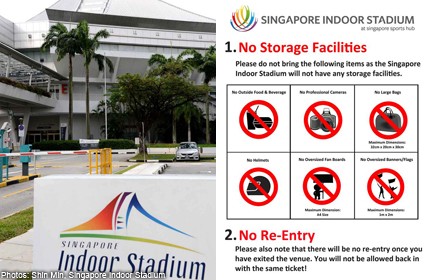 SINGAPORE - Visitors who exit the Singapore Indoor Stadium halfway through a performance will not be allowed back in even if they possess the same ticket, reported Shin Min Daily News.

It is one of the stadium's new rules, implemented to thwart fraudsters who collect additional tickets from others within the venue, and then leave to bring in people who did not purchase the tickets.

Mr Yan Guanghua, Managing Director of concert organiser One Production is one of those who disagree with the move.

He told Shin Min that while there are indeed those who illegally bring others into the stadium, there are others who genuinely need to leave a performance halfway, such as to get something from their car or to buy food.

He commented that the paying audience should not be inconvenienced by a minority of the "black sheep".

As for the other new regulations, Mr Yan thinks they are mostly reasonable.

Visitors are now also banned from bringing in the following: