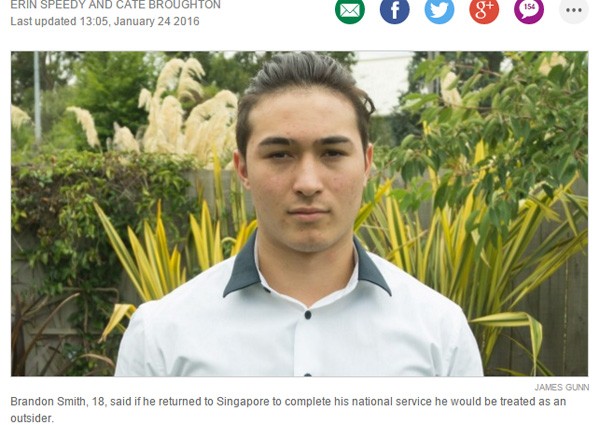 A 19-year-old teenager born in Singapore but brought up in New Zealand is facing jail time and a hefty fine, if he does not return to serve National Service (NS).

According to stuff.co.nz, authorities are demanding that Brandon Smith, who holds dual citizenship with New Zealand and Singapore, report for a pre-service medical.

Otherwise, he faces two years' jail or a $10,000 fine. Under Singapore law, he is only allowed to relinquish his Singapore citizenship when he turns 21.

Mr Smith moved to Dunedin with his family when he was eight years old, according to the report, and says that serving two years of NS would be pointless.

His mother, Cindy, is a Singaporean and a New Zealand permanent resident, while his father, Shane, is a New Zealand national who served in the air force.

"I don't see the point of it, really. It's sort of a waste of time to go there and just come back anyway," said the teenager.

Mr Smith, who doesn't speak Mandarin, says he would be treated as an outsider, and it would be difficult to find a place to stay after the first three months of in-camp training.

He says he does not want to impose on his family in Singapore and that finding accommodation here would be impossible with the monthly NS allowance.

According to the report, Mr Smith has applied numerous times to defer his NS call-up but was repeatedly rejected. However, authorities had granted his younger brother a deferment.

The senior Smith says he has been corresponding with authorities and Singaporean MPs for years, but "no one would accommodate us".

"It was always the same answer; 'we regret to inform you that Brandon has to serve National Service'," he said.

According to the patriarch, the family has run out of options.

He said: "Obviously for Brandon, it's not what we want. If he doesn't go back to Singapore to serve his NS, then he can never enter Singapore because he runs the risk of being arrested."

The family have turned to Dunedin South MP Clare Curran for assistance in September last year as a last resort.

Ms Curran had sent an appeal to New Zealand Minister of Foreign Affairs Murray McCully, stating that "it's a really good case for New Zealand to be sticking up for its citizens".

According to stuff.co.nz, Mr McCully said in a statement on Saturday (Jan 23) that he intends to take the matter up.

"While the Singapore Government is responsible for determining their own citizenship policies, I have considerable sympathy for the situation this family has found themselves in," he said.