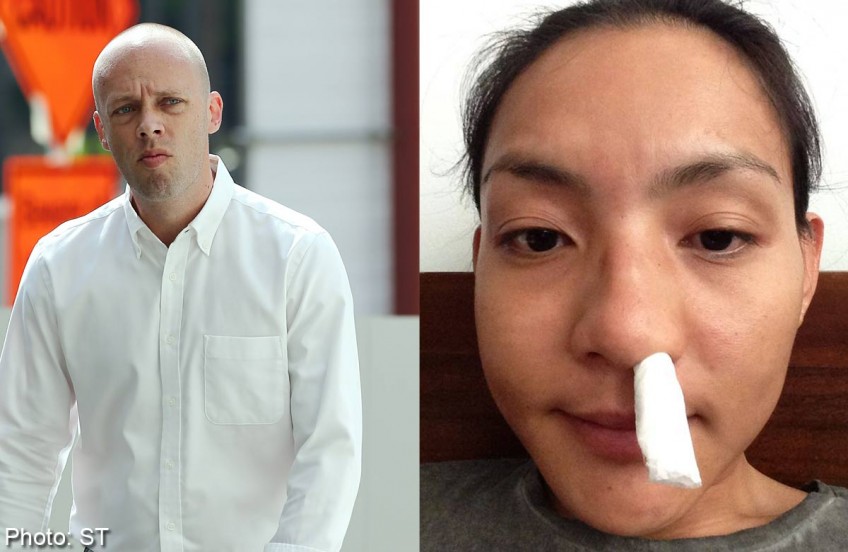 IT’S HISTORY: Peter Jeremicjczyk (far left) punched Ms Dawn (left) Ho after she tried to intervene in his argument with a cab driver.

She still has not got an apology from the stranger who punched her last year.

But jazz singer Dawn Ho, 35, said she has forgiven him even though he left her with a swollen and bleeding nose. And the experience will not stop her from helping others in the future.

On March 9 last year, Ms Ho was punched in the nose by Australian Aaron Peter Jeremicjczyk after she tried to intervene while he was arguing with a cab driver.

At 9.20pm that day, Jeremicjczyk had been drinking at a beach bar with two friends. They flagged a cab at the Beach Station on Sentosa, intending to head to Orchard Road.

But Jeremicjczyk got angry when he learnt of the $43 fixed fare, which was part of the limousine service.

He argued with the cab driver, who alighted from the vehicle to get help from the limousine counter staff.

Ms Ho and her two friends saw this while waiting for another friend, Mr Syed Munir Alwi, to pick them up.

Mr Munir later arrived in his car and Ms Ho and her friends went to his car.

As Ms Ho walked past Jeremicjczyk, she told him off for shouting at the cab driver and the two exchanged heated words.

Mr Munir got out of his car and quelled the argument. Ms Ho got into the rear passenger seat of his car while shouting at Jeremicjczyk.

As Mr Munir was about to drive off, Jeremicjczyk approached the car and punched Ms Ho through the open window and walked away.

Ms Ho was taken to Singapore General Hospital for her injuries.

Yesterday, Jeremicjczyk's lawyer, Mr Shashi Nathan, said in mitigation that his client was provoked by Ms Ho, who had allegedly hurled profanities at him.

Mr Nathan added that Jeremicjczyk lost his job two days after the incident and he had wanted to meet Ms Ho to apologise and compensate her but nothing came out of it despite discussions with her lawyers.

Ms Ho, who is studying jazz performance at Lasalle College of the Arts, told The New Paper over the phone yesterday that she took a month to fully recover.

"We exchanged unpleasant words but punching me really tipped the scales against him," she said, adding that her performance a few days after the incident went well despite her injuries.

"Everyone makes mistakes and it is over now. Whatever his reasons were, I hope he has learnt his lesson."