No more wigs for girls who went bald 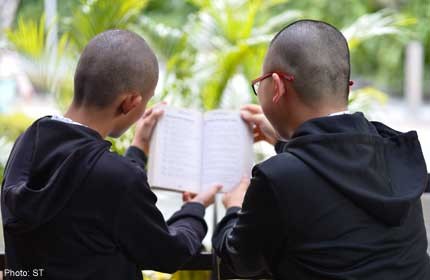 The five St Margaret's Secondary School students who shaved their heads for charity will no longer be asked to wear wigs, said Education Minister Heng Swee Keat on his Facebook page yesterday.

While acknowledging the rationale behind school principal Marion Tan's initial actions, Mr Heng said in his post that it is "reasonable to ask if and how exceptions could be made, under special circumstances like the Hair for Hope cause".

Hair for Hope is a campaign to raise funds for the Children's Cancer Foundation.

Mr Heng said a meeting was held on Tuesday among the students involved, teachers and principal, where the girls shared their learning experiences gained from the incident.

Mrs Tan is said to have "understood that the girls wanted to show empathy and solidarity with cancer patients, which entailed the experience of going bald" and "with this in mind, she has supported all five (students) in their wish not to conceal their shaved heads".

News that three of the girls turned up at school with shaven heads only to be made to buy wigs costing $70 a piece first came to light last week, causing public outrage.

Although it was revealed that the girls had made a prior promise to the school to don wigs, many said doing so went against the spirit of the campaign.

Mr Heng noted that there were many questions as to why Mrs Tan did not make an exception since the act was done for charity, and why the school was so rigid in the first place.

However, he reiterated that "the school had no issue with students having a heart - but the school was also trying to teach the girls that character is seen in how we honour our commitments, as much as it is seen in our charitable acts".

Many netizens who read the post have reacted favourably.

Netizen Sharmini Chellapandi posted: "If this episode creates awareness of and greater empathy for cancer patients and their families, then we're on the right track."