No reason not to return your trays at this food centre 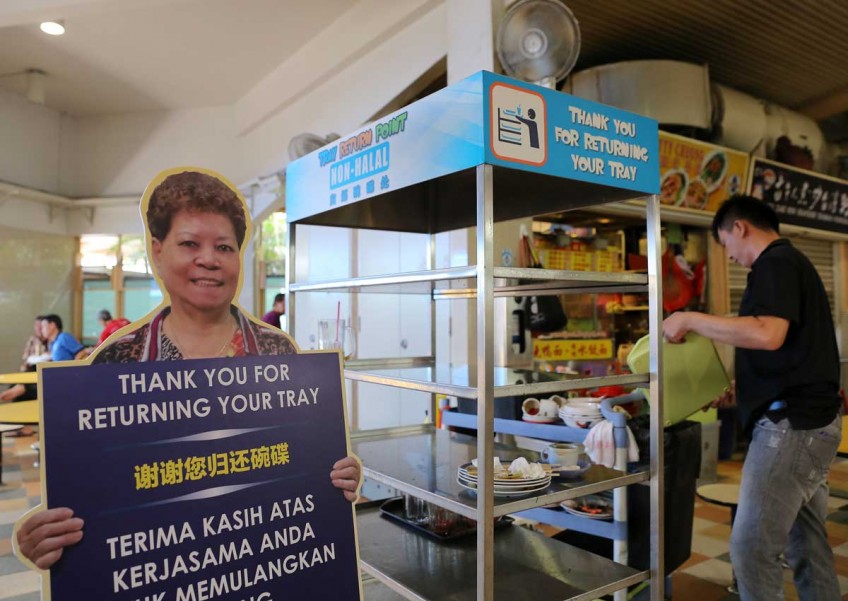 Reminders are all around the revamped ABC Brickworks Market and Food Centre to nudge patrons to do their bit and return their trays.
The Straits Times

More tray return stations, repositioned dining tables, murals and video messages - these are among the new features at the recently revamped ABC Brickworks Market and Food Centre in Bukit Merah.

They were introduced by a task force set up by the Queenstown Citizens' Consultative Committee in July last year, which looked at best practices and took in comments from residents.

By encouraging diners to return their trays and crockery after their meal, other people would be able to find clean tables more easily.

The revamped market and food centre, which was closed from June 20 to 29, was launched by Dr Chia Shi-Lu, an MP for Tanjong Pagar GRC, yesterday.

"This is just the start of the programme. The other thing that we want to do is to keep this going," said Dr Chia at the opening.

In time to come, he hopes to roll out such initiatives at the food centres in Tanglin Halt and Alexandra Village, all in Tanjong Pagar GRC.

At ABC Brickworks Market and Food Centre, four tray return stations have been added to the existing eight.

Dr Chia said younger diners tend to be more receptive to tray return initiatives, but older ones may not be used to it yet.

Besides making it more convenient for them to return trays, the new measures include constant reminders to do so.

Six murals painted by students, video messages aired on three television screens as well as standees placed around the area all aim to drive home the message of tray return and hygiene.

In addition, residents, stall owners and students will be mobilised during monthly tray return and litter-picking exercises to inculcate good social etiquette and responsible community habits.

The revamp cost around $13,000 and was co-funded by the Tanjong Pagar Town Council, National Environment Agency and corporate sponsors, among others.

Said Madam Heng Siu Eng, 62, a customer at the food centre: "The improvements will encourage people to return their own trays, and it will be less messy."

A worker at Leng Kee BBQ, Ms Jane Wan, who is in her 40s, said: "I hope everyone can cooperate, so that it will be cleaner here and there will not be birds picking at leftovers."

She added: "Habits will take some time to change. But this is a good start."

Since 2013, tray return stations have been installed at hawker centres.

Close to 700 food outlets, such as foodcourts, have joined a Tray Return Partnership.

While all hawker centres have some form of tray return facility, there is room for improvement, said Mr Edward D'Silva, chairman of the Public Hygiene Council.

"Because of space constraints, (hawker centres) have put in trolleys that are not necessarily in the best spots."

Dr William Wan, general secretary of the Singapore Kindness Movement, believes the tray return initiative has "not been very successful" because it has not been implemented consistently, with different practices across different food centres.

But he added that food establishments are making it easier for people to return their trays by providing more prominent return points and having cleaners collect trays and crockery only if patrons have left without returning them.

It is a matter of getting people accustomed to the habit of returning trays, he added.

On the new initiatives at ABC Brickworks, Dr Wan said: "These are helping us to be reminded and understand that returning trays is a good thing, and not to be shy to do it."