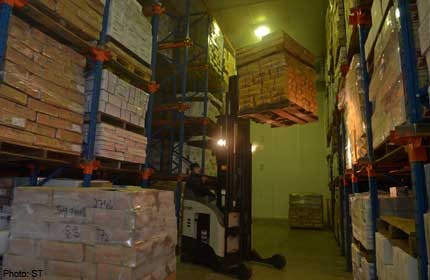 A worker in the cold storage room of Hai Sia Seafood where frozen fish are stored.

SINGAPORE - Singapore fish merchants, worried that Malaysia may suspend the export of even more seafood in the future, say consumers may have to start settling for fish which is less fresh.

Last week's two-month ban on five species was due to seasonal demand pushing up prices by 30 to 40 per cent in parts of the country, Malaysia's Fisheries Development Authority marketing director Mohari Mohd Tamin told The Straits Times on Wednesday.

He added that the export ban on Indian mackerel (kembung), short-bodied mackerel (pelaling), hardtail scad (cencaru), round scad (selayang) and one-finlet scad (selar) was not exclusive to Singapore, as Thailand, Indonesia and the Middle East were also affected.

The impact of the ban, which began last Wednesday, is not as widespread as initially feared here.

The Agri-Food and Veterinary Authority (AVA) clarified on Wednesday that the five species from Malaysia made up less than 4 per cent of the total imported from around the world last year.

Singapore Fish Merchants' General Association president Lee Boon Cheow also gave an assurance that there will not be a shortage of the banned fish in markets. Its members are already looking to sources in Thailand and Indonesia.

But consumers may have to settle for fish which is less fresh as it can take at least two days to bring stocks to Singapore, he added. Fish from Malaysia is usually sent here the day after being caught.

The ban has dented business confidence, members of the association told reporters on Wednesday.

Kian Huat Fish Merchant normally imports 2,000kg to 4,000kg of fish from Malaysia daily, of which 80 per cent are the banned varieties. Owner Lim Ah Lik is now increasing his imports from Thailand to make up for the shortfall, and may do so for the long term so as to decrease reliance on Malaysian suppliers.

A joint $7 million investment project with his friends to build a frozen fish factory in Iskandar, Johor, has also been put on hold.

"I am reconsidering. If they suddenly ban the export of fish, I won't be able to sell my products in Singapore and will make a loss," Mr Lim said.

Many were upset with how sudden the ban was.

He said many of the merchants found out about it only through their transport operators who, three days before the ban took effect, were given slips of paper at the Malaysian Customs listing the types of fish affected.

Mr Ang, who is also the association's vice-president, added: "Who knows, they may ban prawns or squid next."

The association will meet AVA officials on Friday to discuss the issue and possible solutions, including asking Malaysia to allow small amounts of the banned fish to be exported, Mr Lee said.

Housewife Lynda Yeo, 53, said she usually buys kembung imported from Malaysia because it is fresher but does not mind switching to those from other countries.

She said: "The meat won't be as sweet but I'm okay with that as long as the fish was stored properly."