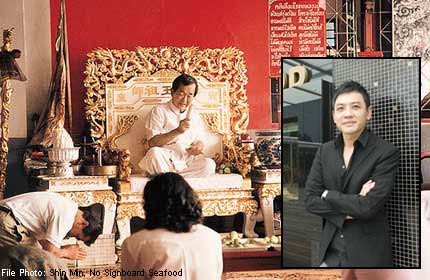 The White Dragon King imparting his teachings to his disciples.

SINGAPORE - When he heard that Chinese Thai mystic the White Dragon King had died, No Signboard Seafood managing director Sam Lim dropped everything and flew to Bangkok the next day.

"He died last Saturday morning and I got the phone call that afternoon. I quickly handed over what needed to be done to my right-hand man and flew to Bangkok the next day," the 36-year-old told The New Paper.

The White Dragon - who was born Chow Yamnam, but renamed himself Bai Long Wang (White Dragon King) - was known as a soothsayer to Hong Kong stars.

He suffered from bronchitis for years and died in his home in Thailand. He was 76. The mystic had been popular with entertainers, including Jackie Chan, Eric Tsang, Alan Tam, Nat Chan, Tony Leung Chiu Wai, Shu Qi, Richie Ren and Gillian Chung.

They had consulted him about their careers. Like Mr Lim, actors Leung and Tsang travelled to Thailand when they heard the news.

Mr Lim, too, sought guidance from the White Dragon King for his restaurant business. He would visit the man often - sometimes with his friends.

"Most of the time, what the White Dragon King told me was sound advice and guidance in running my business, and... on being a good and honest person," he said. "He doesn't encourage superstition."

Yet, there were some who went, seeking winning 4-D numbers. "I guess different people, different priorities," Mr Lim said.

During this period of mourning, the temple is not accepting donations.

Since the death of the White Dragon King on Saturday, groups of Singaporeans have thronged his temple in the past six days to pay their last respects.

For the last 15 years, tour agent Alan Tan, 65, has been taking between 30 and 40 people every month to Thailand to see the mystic.

He said 20 people will be going with him on Aug 29 "to pay their respects and attend the funeral".

Mr Tan Yeow Chong, 40, a tour and transport operator with Siam Kid Travel, said he had arranged transport for 60 to 70 people.

"(You) can expect a great number of people on the last two days of the wake. I'm expecting about 100 people," he said, adding that about 20 had already visited and would return for the funeral.

Mr Tan had been organising tours to the temple for four years.

"In the recent months, I only organised transport from Bangkok to the temple. I rent out about 20 to 30 vans a month, each carrying eight people," he said.

"One of the disciples at the temple told me that the last two days (of the wake) would be a very grand affair," said Mr Tan, , who added that he, too, had benefited from the White Dragon King's teachings.

The disciple was expecting 4,000 to 5,000 people from Thailand, Hong Kong, Taiwan, Singapore and Malaysia.

Mr Lim will be flying to Bangkok on Aug 29 to attend the last days of the wake and the funeral.

Who is White Dragon King?

He was a mechanic who became a mystic.

Born on May 5, 1937, near Pattaya, Thailand, to Chinese parents, Mr Chow Yam-nam was said to have worked in the electronics industries.

He also fixed bikes and was even a street hawker, reported The South China Morning Post.

He was only 13 when he had visions of an obscure Chinese deity that appeared to him as a great white dragon, reported Eastweek Magazine.

When he was 28, he escaped death in a car crash and was "told" by the dragon to build a temple.

Mr Chow taught himself palmistry, soothsaying and fengshui. But it was in his 40s that he became a trustee of the dragon king spirit and had been dressed in white since.

He was said to have received the white dragon enlightenment and earned the badge of what is called Interactions Between Heaven and Mankind, and his life was changed after that, reported East week Magazine.

Married with four daughters, Mr Chow renamed himself Bai Long Wang (White Dragon King) and had since been known as a "living saint".

Covered by a cloak of mystery and legend, the White Dragon King, claimed to have studied the art of xuanxue (Neo-Taoism) through watching others.

Since he had become the trustee of the dragon king spirit, quite a number of Hong Kong actors and actresses sought his blessings.

Singer Daniel Chan regained his place at the top of the charts after a visit to the self-styled guru.