NODX slides for a second month 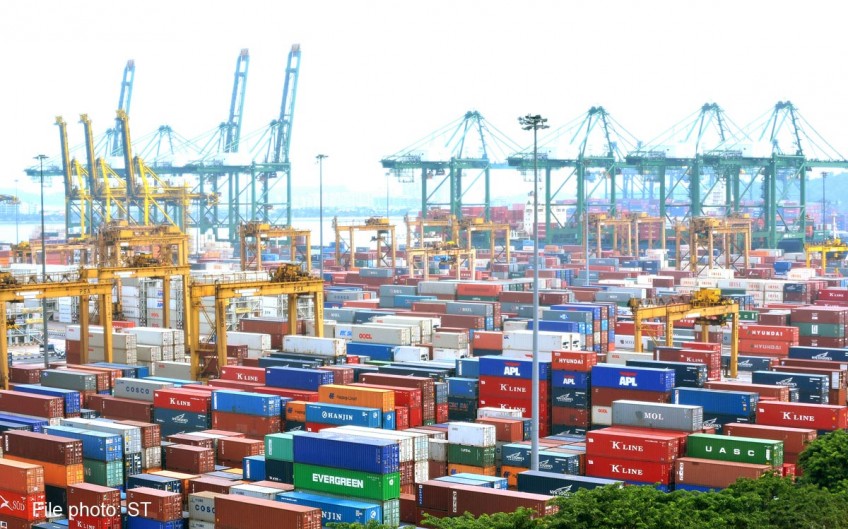 The hoped-for trade recovery in the second half grows dimmer as Singapore's non-oil domestic exports fell last month for a second straight month.

The NODX tumbled 4.6 per cent from a year ago, more than the 2.7 per cent dip private-sector economists predicted. And it came after a 6.6 per cent drop in May.

The latest decline brought the NODX down 2.2 per cent in the first six months of the year.

Shipments to most of Singapore's top 10 export markets fell last month, with Hong Kong, South Korea and the European Union the three biggest contributors to the decline. The exceptions were Malaysia, Indonesia, China and Taiwan.

The NODX's poor showing last month was the latest in a string of disappointing economic news. Three days ago, the Ministry of Trade and Industry disclosed that the economy grew an estimated 2.1 per cent year on year in the second quarter, slowing from 4.7 per cent in the first quarter.

On Wednesday, it was reported that the Purchasing Managers' Index, a leading indicator for the manufacturing sector, slipped again last month to 50.5, lower than May's 50.8 reading.

Month-on-month, the NODX in June reversed the previous month's 7.5 per cent fall to post a seasonally adjusted 1.5 per cent rise.

But the increase still fell short of the market's forecast of a 3.7 per cent hike.

International Enterprise Singapore, the trade promotion agency which released the latest trade data yesterday, blamed last month's year-on-year decline on the electronics NODX. This sank 17.4 per cent last month, after a 15.3 per cent drop in May.

The decrease outweighed the rise in the non-electronics NODX, which inched up 1.3 per cent, against a 2.4 per cent fall in the month before.

"Currently, the Singapore export plane is flying with only one engine, namely the non-electronics, working at this juncture," said Selina Ling, OCBC Bank's head of treasury research and strategy.

"The longer the turnaround in the electronics sector takes, the more likely that full-year NODX growth will undershoot the official 2014 NODX growth forecast of 1-3 per cent," she added.

The electronics NODX has been heading downhill for a 23rd consecutive month.

Added Citigroup's Kit Wei Zheng: "There are few signs at this stage that the hoped-for export recovery in the second half of 2014 is about to materialise." He noted that non-oil retained imports of intermediate goods fell further by a seasonally adjusted 0.3 per cent month-on-month in June, following a 21.3 per cent plunge in May.

The result: The seasonally adjusted levels in the second quarter came 9 per cent below the first-quarter's levels.

ANZ's Daniel Wilson and Glenn Maguire tipped the NODX to continue to underperform, because of the on-going economic restructuring which puts a squeeze on output and shipments. "Notably, the semiconductor segment is expected to drive a contraction in production for the rest of the year and this will undoubtedly result in weaker domestic exports," they said in a brief report.

Pointing out that NODX still shrank despite strong chemical shipments, the ANZ economists concluded that "the risks continue to be on the downside for production and exports in the second half".

The only bright spot in last month's trade figures is non-oil re-exports. They picked up pace to post a 7.5 per cent year-on-year jump, upturning the 4.7 per cent fall in May - the first drop seen after 13 straight months of expansion.