Non-stop climb up Kinabalu in 8 1/2 hours 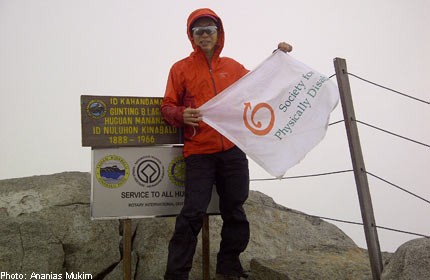 SINGAPORE - Singapore mountaineer David Lim has become the first mobility-impaired person to reach the top of one of South-east Asia's tallest mountains in a single day.

Starting early on Friday morning last week, he took just 81/2 hours to reach the 4,095m-high summit of Mount Kinabalu in the Malaysian state of Sabah.

Most able-bodied climbers spend their first day going up part of the mountain, rest overnight, and complete the climb early on the second day.

A veteran of Everest and other climbs, Mr Lim, 49, became partially disabled in both legs in 1998, when he was struck with a rare nerve disorder called Guillain-Barre Syndrome.

He has been up Kinabalu eight times previously, with his fastest time being 71/2 hours over two days.

His non-stop attempt on Friday was for charity. He hopes to raise $10,000 for the Society for the Physically Disabled (SPD) and has donated $4,095 himself.

"The climb felt great," said Mr Lim, who started out with a friend and a local guide at 7.30am last Friday.

Speaking to The Sunday Times from Malaysia yesterday, he said the most challenging section was the last stretch above 3,300m.

By then, his able-bodied friend was too tired to carry on. Mr Lim himself was weary and started to have leg cramps.

"This was worrisome, so I slowed down and worked on massaging my thighs to shake the cramps off," he said.

"I was really tired and wondered for a moment if I could make it. I pushed myself by falling back on my previous experience in such situations - moving slowly but steadily and keeping focused on the goal."

Aiming to finish the climb within a single day was also risky, as thunderstorms typically strike in the afternoon.

He said there were spells of hailstones and rain, but that "broke the monotony of the final stretch".

When he reached Kinabalu's rocky top, he flew the SPD flag again, as he had on previous climbs.

He is expected home today. Asked what he was most looking forward to, he said: "A hot shower."

Those who would like to donate to SPD, which strives to integrate disabled people into mainstream society, may do so at www.sggives.org/spd