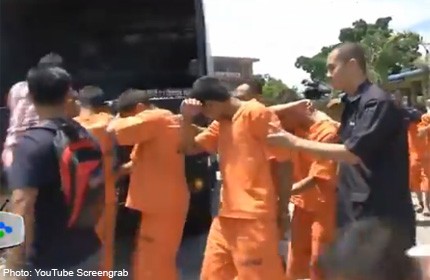 PEKAN - A 17-year-old boy was charged at a magistrate's court here with the murder of a fellow National Service (NS) trainee last month.

The six had allegedly attacked the victim between 1.30pm and 10.30pm at the dormitories of the camp for allegedly jumping queue during breakfast on Sept 22.

Meanwhile, two youths, Muham­mad Syafiq Izzat Roslan, 18, and Mohd Nazeri Mustafa, 21, claimed trial to the charges of voluntarily causing hurt to the victim.Mohamed Ruhizat set bail at RM3,000 (S$1,200) each and fixed Nov 13 for mention and Dec 11 and Dec 12 for the trial of the two.

Three others - 23-year-old Mohd Firhan Hafizi Ismail, 23, and two other 17-year-olds - will go on trial on Dec 18 and Dec 19.The court also set bail at RM3,000 for each of the three. Lawyers Osman Abdullah and Noor Adilah Zarian represented the five while Deputy public prosecutor Syamsul Kahar Ahmad Nadri appeared for the prosecution.

The murder charge carries the mandatory death sentence while the charge for causing hurt provides for imprisonment up to one year or a fine up to RM2,000, or both, upon conviction

Two suspects were later found with fractured hands, said to be due to the blows they landed on the victim.

Another trainee found his motionless body in the bathroom and alerted the camp administrators.

A post-mortem showed he died from internal bleeding in the head due to blunt trauma.