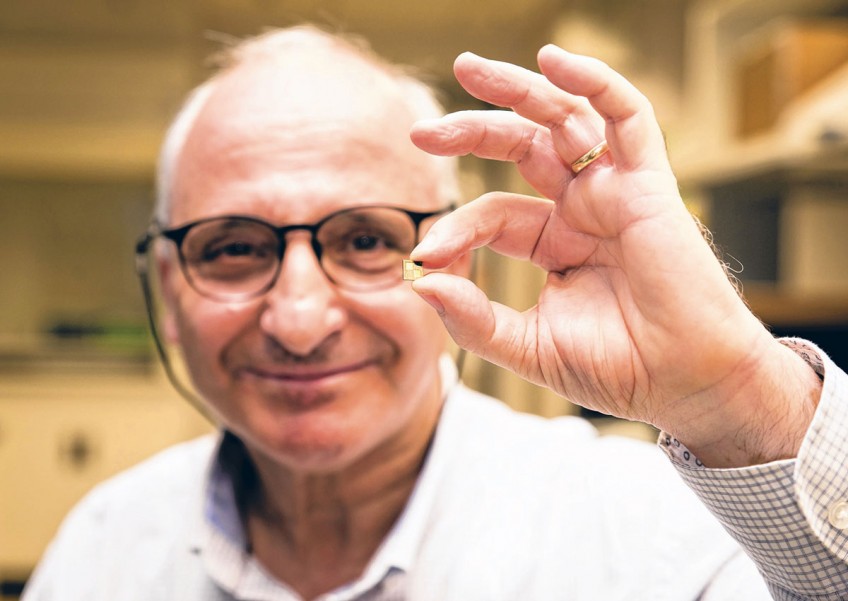 NTU Professor Rachid Yazami, 62, holding the smart chip he invented. Embedded into rechargeable Lithium-ion batteries, the smart chip optimises how the batteries are charged and can reduce charging time to less than 10 minutes.
NTU

A chip the size of a fingernail and developed in Singapore could offer an answer to a common gripe of smartphone users - having to wait hours to get a full charge.

Nanyang Technological University professor Rachid Yazami claims that the smart chip he invented can cut recharge times to 10 minutes or even less, and can also reduce the risk of battery fires.

The technology, he said, has already garnered keen interest from some of the biggest names in the industry. KVI, a company he set up to market the chip, has already been in talks with Sony, Sanyo and Samsung. He also intends to approach electric-car maker Tesla.

"My vision for the future is that every battery will have this chip," said Dr Yazami, whose current team of two took more than five years to develop the chip.

Currently, electricity is trickled into lithium batteries during charging to avoid overheating.

The new chip, however, can optimise the charging process, allowing batteries to power up at full speed.

It is able to do this because it contains a unique algorithm to precisely measure the amount of charge left in a battery depending on its temperature and voltage. A similar chip is contained in the charger.

Together, they ensure that the lithium battery, used in many modern gadgets including laptops and tablets, is charged optimally.

"Current chargers do not take into account the health of a battery when charging it," Dr Yazami said. "They send the same amount of charge regardless of the battery's condition. With this chip, the charge can be regulated to avoid damaging the battery."

The same technology allows the smart chip to determine if a battery is safe to use, which current technology does not do.

This means that the smart chip can potentially prevent devices from catching fire due to an overheated battery, Dr Yazami said.

"Although the risk of a battery failing and catching fire is very low, with billions of lithium-ion batteries produced yearly, even a one-in-a-million chance would mean more than a thousand failures."

The chip is expected to be made available to chip makers and battery manufacturers by the end of 2016.