NTU to put half its lectures online by 2020 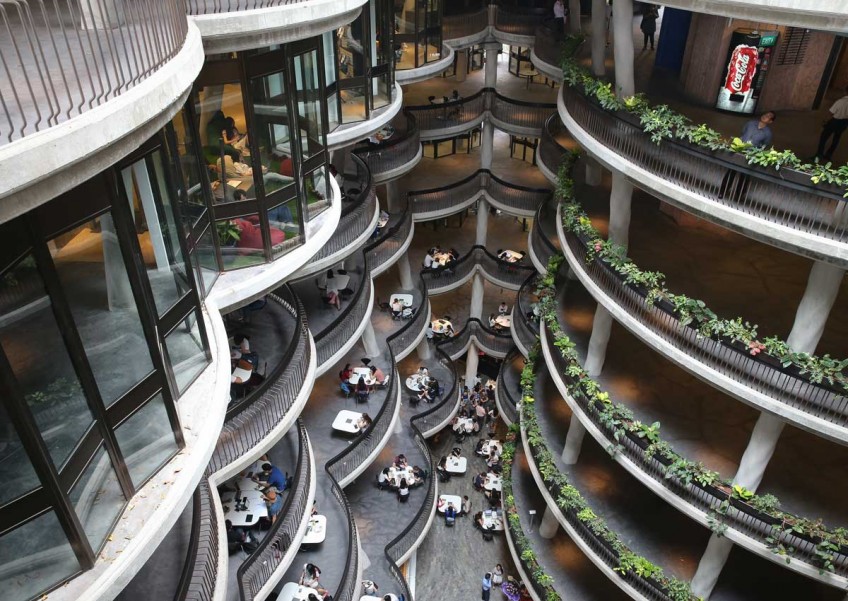 Nanyang Technological University (NTU) plans to put lectures and course content of half of its nearly 3,000 undergraduate courses online within the next five years, so that more "flipped-classroom teaching" can be done.

The idea of the flipped classroom reverses the traditional teaching arrangement by delivering instructions, often online, outside of the classroom, leaving classroom time for deeper learning activities such as homework and discussions.

The university will spend about $75 million implementing this unconventional learning model, with some 1,500 courses to use it by 2020. For a start, it targets to convert at least 150 undergraduate courses to use the new pedagogy in this academic year, which started in August, with a third of them already completed.

This was revealed at the official launch of NTU's $45-million learning hub, The Hive, yesterday. The building - composed of 12 eight-storey-high towers of stacked, rounded rooms - is designed to support the teaching method.

Kam Chan Hin, NTU's senior associate provost of undergraduate education, said while the approach is suitable for the bulk of the university's courses, particularly those that would benefit from student interactions, not all can be converted to go online.

Professor Kam added: "The ability to take learning into their own hands is an invaluable skill that will stay with our students even after they graduate."

The Hive, which took almost three years to complete, has done away with traditional classroom layouts. Each of its 56 "smart" classrooms, designed with no corners, comes equipped with flexible clustered seating, electronic whiteboards, multiple LCD screens and wireless communication tools.

NTU has, in the past three years, converted tutorial rooms in other buildings into such classrooms. A second learning hub, with more smart classrooms, is being built and will be ready by 2017.

Then, it will have about 200 smart classrooms to support flipped-classroom learning. The university has already introduced the approach in some programmes such as renaissance engineering and medicine, and the approach will be rolled out progressively for others.

Under the approach, students may go through course content at their own pace via videos or recorded PowerPoint presentations before class. They then form groups of five or six, and discuss questions as a team during class time.

The Hive, which has almost no straight edges, was dreamed up by renowned British designer Thomas Heatherwick.

It had been nicknamed the "dim sum-basket building", as the structure resembles the round wooden trays used for Chinese snacks.