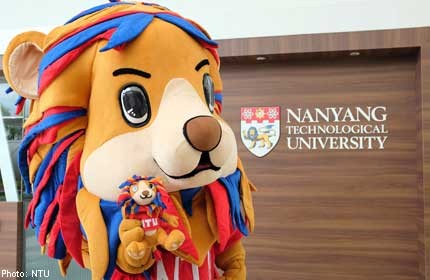 The NTU mascot named Lyon made its debut at the launch of Welcome Week earlier this afternoon, and was greeted by about 500 students, faculty and staff.

Symbolising the university's values of strength, courage and fearlessness, Lyon was selected from more than 80 student entries, which included futuristic-looking robots and animal hybrids.

The winning design by Mr Chia Yan An, a final-year Computer Science undergraduate, emerged tops despite strong competition of entries from the School of Art, Design and Media.

Amongst 80 entries received, 10 designs were shortlisted and were earlier put to the vote by members of the NTU community, with over 6,000 votes cast.

Speaking at the Welcome Week launch ceremony earlier today, Professor Bertil Andersson said, "Our new mascot is a welcome start of a new tradition at NTU, and an icon that all of us should be proud of. As the embodiment of our NTU spirit, it not only brings our community together, but will also inspire our teams to give their best performance during inter-varsity and other competitions."

The adoption of "Lyon the lion" as the official mascot will provide a rallying point for the university community.

Besides appearing at sports and other inter-varsity competitions, Lyon is also expected to make regular appearances at NTU's major campus events, such as the annual Open House, Convocation, and the launch of major University initiatives.