NTUC hails a dear brother and true fighter for workers 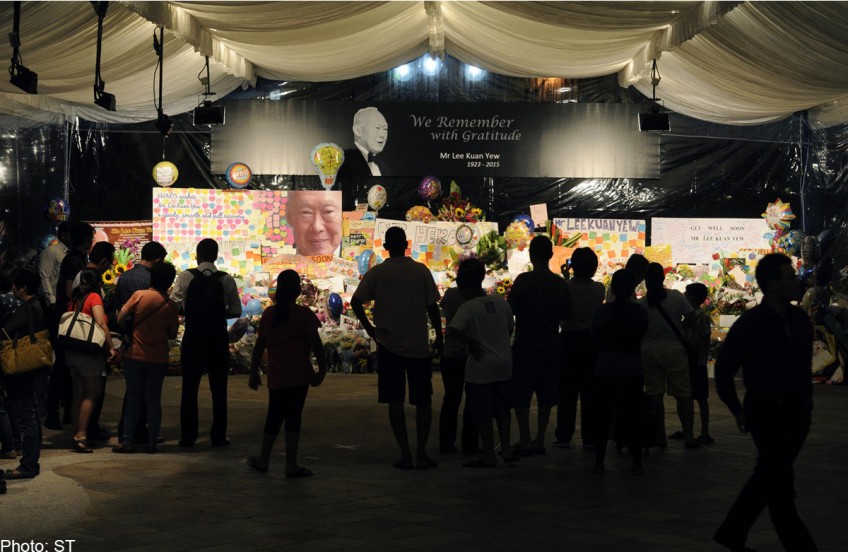 Visitors (above) continued to arrive and pay tribute to Mr Lee Kuan Yew yesterday evening at Singapore General Hospital Block 7, where a banner saying “We Remember with Gratitude, Mr Lee Kuan Yew 1923-2015” had been put up.

Mr Lee's lasting legacy as Prime Minister was his championing of the strong spirit of tripartism, or the three-way partnership of the Government, unions and employers, it added.

"Because of his care and concern for the people, countless workers have benefited from fair treatment, higher wages and better conditions at the workplace," the NTUC said in a statement signed by its president, Ms Diana Chia, and secretary-general, Mr Lim Swee Say, a Cabinet minister.

"It is because of him that we, as a people, can lay claim to better jobs, better lives and brighter futures ahead."

The labour movement noted that Mr Lee's involvement with trade unionism can be traced to 1952, when he represented the Postal and Telecommunications Uniformed Staff Union in negotiating a settlement, after the union went on strike.

Mr Lee was then a 29-year-old lawyer who had returned to Singapore in 1950 and was working as a legal assistant in Laycock & Ong, a law firm near Raffles Place.

He got wage increases for the postal workers and went on to become the legal adviser to more than 100 unions and associations, building a reputation as a champion of workers and underdogs.

It laid the foundation of the People's Action Party's "symbiotic relationship" with non-communist unions.

"We had grown up in the unions; we had built up our political following working on and through workers' problems, fighting against unfair treatment and injustice," wrote Mr Lee of PAP's union roots in a May 2014 essay in PAP's Petir magazine.

Mr John De Payva, NTUC's longest-serving president from 1997 to 2011, said Mr Lee had always had a "personal interest in the labour movement since the 1950s".

"The leadership of the labour movement supported his party to power," said Mr De Payva.

"That relationship was indelible."

Mr Lee received the NTUC's highest award - the Distinguished Comrade of Labour - in 1991. In the citation, NTUC credited him for his role in building a society with industrial peace, justice, social mobility and an equitable sharing of the fruits of labour.

Mr Lee was the first recipient of the award, which has since been given to only three other leaders: former labour chiefs Ong Teng Cheong (1994) and Lim Boon Heng (2007), and then Prime Minister Goh Chok Tong (2001).

When the NTUC held its 50th anniversary in May 2011, Mr Lee was honoured as one of 50 key movers and shakers in the first 50 years of its history.

The last NTUC event he attended was a closed-door dinner in January 2012 to honour nine leaders who stepped down from its highest decision-making central committee for union leadership renewal.

One leader who had stepped down was Mr N. Silva, president of the Union of Security Employees, who recalled that Mr Lee thanked the unionists for their service and spoke to them about improving the lot of low-wage workers through NTUC's progressive wage model, which links pay increases to training.

"He always has a heart for workers, especially low-wage workers," said Mr Silva of Mr Lee.

The NTUC will hold a series of activities to mourn Mr Lee's death.

These include setting up counters at its Marina Boulevard headquarters where workers and members of the public can pen their condolence messages from today till Sunday.

Union leaders will observe one minute's silence at noon at the headquarters today. A memorial service later this week is being finalised.