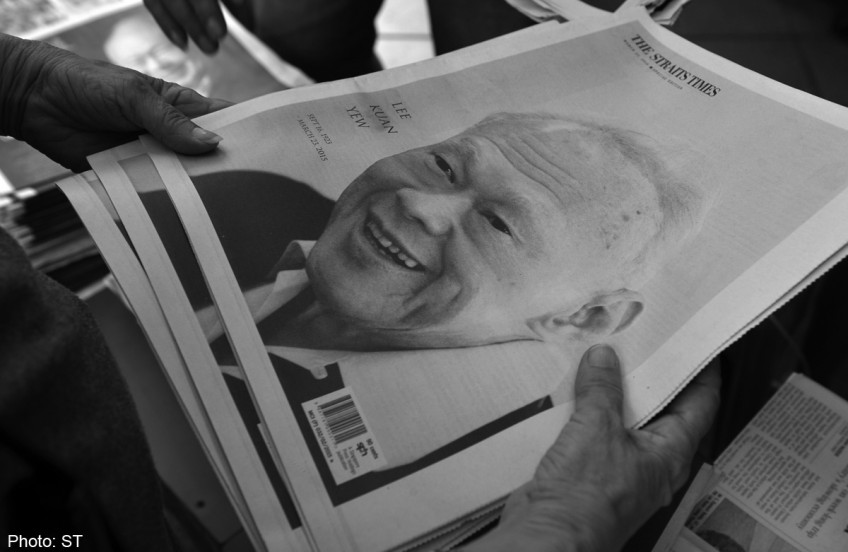 The National University of Singapore will hold a special Memorial in honour of the late Mr Lee Kuan Yew on Tuesday, 24 March 2015, from 2pm to 3pm at the Lee Kuan Yew School of Public Policy.

Those who wish to may also share their thoughts online in memory of Mr Lee at www.facebook.com/nus.singapore.

The condolence books from NUS will be presented to the Lee family.

The university also mourned the passing of Mr Lee.

NUS Chairman Mr Wong Ngit Liong said: "We are deeply saddened by the news of Mr Lee Kuan Yew's passing. Mr Lee was a globally respected statesman, a visionary leader, and a much admired alumnus of the National University of Singapore. He was a giant of a man who was passionate about education, and a fearless pioneer who made it possible for Singaporeans to have a standard of living today that is admired by many. NUS mourns the loss of one of our own, and sends our heartfelt condolences to PM and Mrs Lee, and the Lee family," said NUS Chairman Mr Wong Ngit Liong.

NUS President Professor Tan Chorh Chuan, who had hosted Mr Lee at several university functions, said, "Singapore today is a direct result of Mr Lee Kuan Yew's visionary leadership, sheer will and hard work. He transformed a small island with no natural resources into a modern, successful nation respected by countries around the world.

There are many things for which we thank Mr Lee, including his unwavering focus on building an outstanding educational system in Singapore. All of us at NUS mourn the passing of an eminent alumnus, an inspirational leader, and a true icon of our times."

Mr Lee, who was the top student in Malaya at the time, had joined Raffles College in 1940 on a scholarship to study economics, English literature, and mathematics. It was here, at what is today NUS' Bukit Timah Campus, that Mr Lee met his future wife, Madam Kwa Geok Choo, and several future colleagues. The Japanese Occupation of Singapore in February 1942 interrupted Mr Lee's studies, when he was nearly 19 years old. Mr Lee later continued his studies at the University of Cambridge in the UK.

As Singapore's first Prime Minister from 1959 to 1990, Mr Lee overcame many daunting challenge, and against the odds, built Singapore into a vibrant cosmopolitan city-state and a great global city. From 1990 to 2004, Mr Lee took on the role of Senior Minister, and later Minister Mentor (2005 - 2011). He retired from politics in May 2011 but remained active on the global stage, a highly respected statesman in both the East and West.

Mr Lee had always been a strong advocate of education, and many prizes and awards at NUS were established in his name to assist students.

The Lee Kuan Yew Distinguished Visitors Programme, managed by NUS, invites internationally eminent and outstanding academics and scholars to Singapore as Lee Kuan Yew Distinguished Visitors, while the Lee Kuan Yew Postdoctoral Fellowship Programme promotes the development of young and outstanding academics in science, medicine and engineering. The prestigious Lee Kuan Yew Scholarships, set up in 1991, recognise outstanding individuals with the aptitude and inclination to contribute to society. Scholars can either pursue Master's or PhD programmes at local or overseas universities. In 1996, the Lee Kuan Yew Gold Medals were instituted to award best performing graduates throughout the course of study for 18 programmes. Mr Lee generously donated the sale of his memoirs to create two Lee Kuan Yew Prizes in 2001. These prizes are awarded each to the best student for the degree of Master in Public Management and the degree of Master in Public Policy. Mr Lee also gave the proceeds of autographed editions of his books to the Lee Kuan Yew Scholarship To Encourage Upgrading Award (LKY-STEP). The award encourages upgrading and lifelong learning and is offered to outstanding polytechnic graduates pursuing full-time undergraduate degree courses at the local public universities.

To honour his significant contributions to education in Singapore, NUS named its School of Public Policy after Mr Lee in 2004. Today, the Lee Kuan Yew School of Public Policy (LKY School) not only represents Mr Lee's deep insights and diverse experiences on the issues facing Singapore and the world, but also his enduring ties with NUS and his impact as one of the foremost thinkers of his age. Mr Lee joined the LKY School as a Distinguished Fellow seven years after the School's founding.

Professor Kishore Mahbubani, Dean of the LKY School, said, "When the dust of history settles and the definitive books are written on twentieth century history, Mr Lee Kuan Yew will emerge as one of the greatest leaders of the century. His impact extended beyond Singapore and Southeast Asia. Great leaders like Deng Xiaoping and George H W Bush benefitted from his wise counsel. He will be missed in Singapore and by the world."

Mr Lee received NUS' inaugural Eminent Alumni Award in 2005 in recognition of his excellent and sustained contributions in public and community service, both nationally and internationally.

In 2011, Mr Lee was conferred an NUS Society honorary membership during an appreciation ceremony for the founding benefactors of University Town, where he said: "I hope this culture of giving back to the alma mater can be well established". He noted the importance of lifelong social networks formed during university days, saying that his stay at Raffles College had made a difference in his life.

In a dialogue with students of the LKY School and guests at the School's 7th anniversary on 14 September 2011, the man who had dedicated his life to Singapore and its people said, "The vision [of Singapore] has got to be your vision, not my vision … You have to have a vision on the kind of Singapore you want. And you got to crystallise that and get your leaders to adopt your vision."

In June 2013, NUS conferred an Honorary Doctor of Laws on Mr Lee in recognition of his widely admired leadership as Singapore's first Prime Minister, his vision, commitment and countless contributions to economic and societal advancement in the country, as well as his strong affiliation and contributions to the University.

Professor Simon Chesterman, Dean of the Faculty of Law, said in his citation on Mr Lee: "Few people are so closely identified with the entire history of a country, as Mr Lee Kuan Yew is with Singapore. Few people have had such an impact not only on a nation's development but also on its character. Lee Kuan Yew … made Singapore his life's work. His success launched a country, inspired a continent, and earned admiration from around the world."

A widely respected leader, Mr Lee successfully transformed Singapore from a British dependency to a thriving nation in the course of one generation. Mr Lee studied at NUS' predecessor institution Raffles College between 1940 and 1941, and was conferred an honorary NUS Doctor of Laws in June 2013. He had earlier received the inaugural NUS Eminent Alumni Award in 2005.

The university said it mourns the loss of an irreplaceable elder statesman, whose vision, leadership and legacy will be remembered by generations to come.

[[nid:182994]]
SUBSCRIBE TO OUR NEWSLETTER
Your daily good stuff - AsiaOne stories delivered straight to your inbox