Oh S'pore, how I miss thee 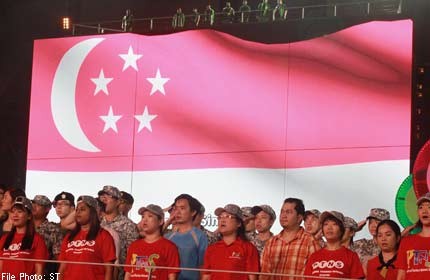 SINGAPORE - Three weeks have been long enough. I miss Singapore.

Travelling along the American East Coast for the best part of a month has been a wonderful experience, but it's the quirks, the little things, that make me miss the sunny island in the sea.

Here are just some of the reasons why...

1) Everyone in the US is a potential threat

Being in the US is like being cast in The X-Files. Trust no one - everyone is a potential threat. The person next to you could be an alien. The X-Files was pretty paranoid, too.

My daughter had to throw away her milk before she was allowed to take a domestic flight from Washington to Florida. She's five. The only threat she posed to other passengers was burping too much.

At airport - and even train - checkpoints, I've had to lift my shirt like it's a tutu and perform a little pirouette. This is to check that I'm not carrying a gun.

If I could cause carnage with milk, imagine what I could do with a semi-automatic weapon.

Bags are also checked at theme parks. At Disney World, a security guard insisted I had a concealed weapon. It was a toy lightsaber.

In the US, everyone seems to be packing a gun. I can go into a supermarket in the US and buy a gun.

What right-minded individual has a shopping list that reads: eggs, milk, bread, toilet roll, semiautomatic pistol and 100 rounds of ammunition?

Still my wife and I are always looking out for people we think might be "packing". I think my wife is spending far too much time looking for bulges on American men.

3) The food here is brown

Eating out in US malls, suburbs and theme parks is no complicated affair. There is always a choice of brown food.

If it's a fancy restaurant, there is dark and light brown food.

Being a vegetarian, I asked one particular outlet if there were vegetable dishes. He pointed out the mashed potatoes. I pointed out that I wasn't a stroke victim - chewing wasn't a problem.

But mashed potato is served with everything, including potato (French fries).

Of course, there have been glorious exceptions - New York's Little Italy, Chinatown and Brooklyn - but in much of America, meals tend to be variations of fried stuff with cheese.

4) Nobody here wants to walk

These people are not disabled, just spectacularly lazy. US theme parks are filled with such lunatics, whizzing round in a race to get a heart attack.

An enormous woman ran her motorised chair across my daughter's foot. "Oh, sorry, I didn't expect to see your foot there," she wheezed to my crying little girl.

"What? You mean, down on the ground, on a pedestrian path?" I replied.

"Yes, putting one foot in front of the other is a tricky business. It's only been about eight million years or so, I'm sure we'll get the hang of it eventually."

She was perfectly capable of walking. She just needed a little push... over a cliff, perhaps.

Theme-park Americans may not be representative of all Americans, but they do have a tendency to make more noise than a goat being electrocuted (this is just a comparison, I'm not asking anyone to test my theory).

They seem to think the listening world is their grandmother. Every conversation has that loud, patronising tone I inadvertently use for my grandmother when I shout things like: "MAYBE YOU SHOULD TAKE A NAP NOW, NAN. AND MAYBE YOU SHOULD STOP SINGING RUDE SONGS IN THE SUPERMARKET."

I heard an American with a strong Southern accent tell his son: "You better go git your mama, and tell her to hurry up. I gotta use the restroom before I meet Buzz Lightyear."

I have no idea why he needed the toilet before meeting a children's movie character and neither did the 50 strangers who overheard him.

6) Singaporeans know where most countries are

Americans have no idea where Singapore is. Some were not even close. When told where I lived, someone actually said: "So is that, like, Japan?"

China, Hong Kong, Japan and even Fiji were all suggested as near neighbours for Singapore.

A New York taxi driver said: "I've never even heard of that place. Where is that?"

I suspected he thought I was making the place up. I showed him my identity card to prove it wasn't the fictional home of Peter Pan.

But he was a kind soul. When I told him I was heading to Florida, he warned me that the sunshine state could be volatile and violent. He insisted I take precautions. So I pulled out a deadly weapon - my Star Wars lightsaber.