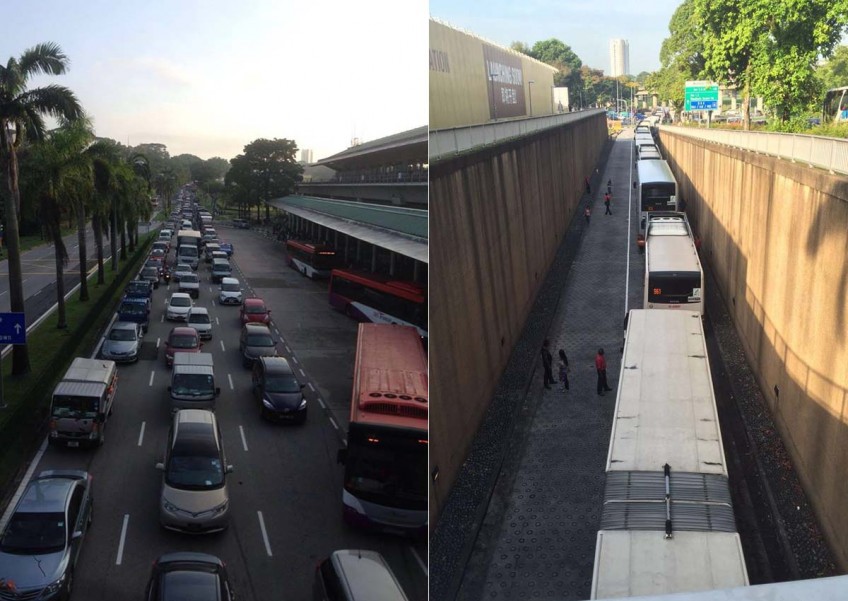 Update at 7.15pm: LTA has completed road resurfacing works along the stretch of BKE (PIE) after the Mandai Road exit, according to an LTA spokesperson. He added that both affected lanes were re-opened at 6.35pm.

Update: Two lanes along BKE have been closed to facilitate recovery, according to a spokesperson from LTA. He added that the affected lanes will reopen once recovery works are completed.

SINGAPORE - An oil spill on the Bukit Timah Expressway (BKE) on Friday morning (Jan 29) has caused vehicles to be caught in a massive jam, said public transport service operator SMRT in a Facebook post.

The spill near the Mandai Road exit towards the PIE led to a congestion that tails back to Woodlands Avenues 1, 2 and 3.

SMRT added that that the Land Transport Authority and the Singapore Civil Defence Force are currently clearing the oil spill.

Affected passengers at Woodlands regional bus interchange are advised to use other forms of transport, or approach SMRT service ambassadors if they need guidance.

SMRT said it is monitoring the situation closely, and will update members of the public of the status of the oil spill.

wow the jam at woodlands!!!!!!! pic.twitter.com/ObBkEV67rF