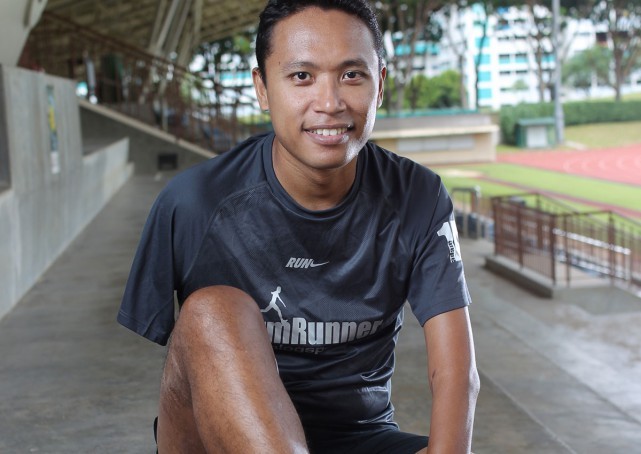 HIS stirring story of overcoming personal adversity was once an inspiration to others.

But yesterday marked the beginning of a dark chapter as national para-athlete Adam Kamis was jailed 38 months for vice-related offences and recruiting a child for sexual exploitation.

The 37-year-old motivational speaker, better known as the "one-armed runner", was convicted last week of 11 charges under the Women's Charter and one under the Prevention of Human Trafficking Act. Another 22 charges were considered during his sentencing.

Adam, who lost his right arm and had his left arm paralysed in a motorcycle accident in 2003, represented Singapore in the Commonwealth Games at Delhi in 2010.

Early in 2013, struggling under debt, he set up an escort agency, SG Freelancers.

Related: He turns pimp and 'tests' women who want to work for him

Using the moniker Angel Tan, he recruited women over Facebook by offering them well-paying freelance jobs.

The women were asked to accompany male clients, chat with them and provide them "physical relief/release'' through protected sex.

Potential employees were asked to fill up a questionnaire and e-mail it to him, along with their photographs.

He then invited the women to his Yishun home, examined their bodies and had sex with them on the pretext of "testing" them.

Deputy Public Prosecutor Sharmila Sripathy-Shanaz said Adam would introduce himself as a handler for SG Freelancers and brief the women on what was expected of them.

While he would not receive a commission for the first client, he expected a 5 per cent to 50 per cent commission for subsequent clients. He would create an online profile for the women on Craigslist and Locanto to advertise their services.

District Judge Lim Keng Yeow imposed nine-month jail sentences on each charge Adam faced, of either procuring or attempting to procure a woman for prostitution.

For recruiting a 16-year-old for exploitation, he was given 20 months' jail, which will run consecutively with two of the nine-month jail terms.

The maximum punishment for the Women's Charter offence is five years' jail and a $10,000 fine each.

Sexual exploitation can result in 10 years' jail and up to six strokes of the cane.