Only 100 spaces for new dialysis patients at 3 charity bodies 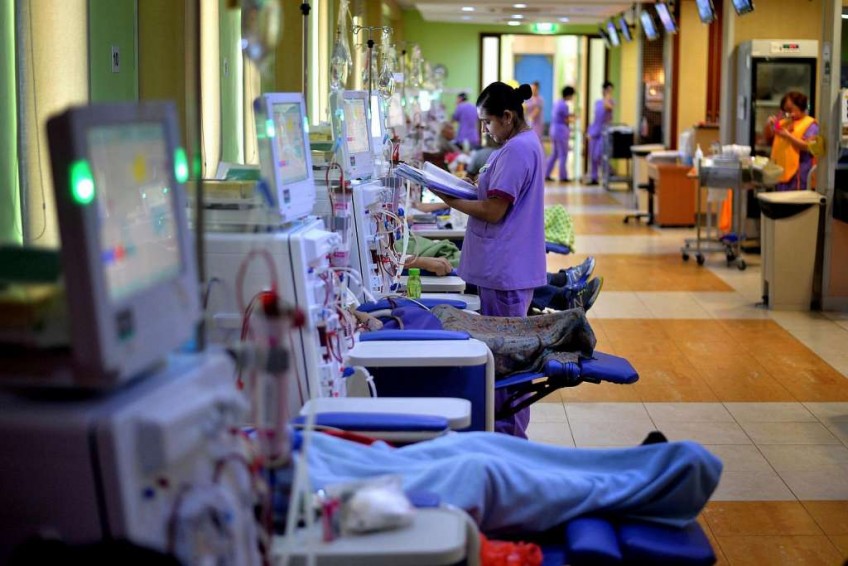 Between them, Singapore's three charity dialysis organisations had space for only 100 new dialysis patients as of last Tuesday, said the Ministry of Health (MOH).

This should be enough to last till June or July, an MOH spokesman said. She added: "Though occupancy rate is high, there is sufficient haemodialysis capacity to cater to renal patients in Singapore."

The two by the National Kidney Foundation (NKF), which can each take 108 patients, will open in September and December.

The MOH would not say who will run the other two centres, but they do not come under any of the three existing voluntary welfare organisations (VWOs) that provide subsidised dialysis.

Should they run out of places for new patients, the spokesman said the ministry allows the VWOs "the flexibility to place subsidised patients with private providers until a place becomes available".

The number of people who lose the use of their kidneys and turn to dialysis has been increasing over the years and topped 6,200 in 2015, the latest available figure. That year, more than 1,000 people were started on dialysis.

While there are different forms of dialysis, nine in 10 choose haemodialysis (HD), where a patient goes to a centre for four hours three times a week to have the blood taken out, cleaned and replaced.

Roughly three in four people on HD do it at centres run by the three charity organisations, as these are highly subsidised.

The biggest, the NKF, which supports more than 4,000 dialysis patients, has space for 10 more at its 31 HD centres. People's Dialysis Centre can take in 13 more patients.

The Kidney Dialysis Foundation has 78 available places, but these include places set aside for hepatitis patients.

One dialysis chair can be used by six patients. A chair used by a hepatitis patient cannot be shared with patients with no hepatitis, as the virus could be transmitted to them through the machine.

The MOH said: "There will be sufficient subsidised HD capacity in the coming years to meet the nation's needs."

Next year, the NKF will open three more dialysis centres that together can care for 378 patients.

But the MOH spokesman said, in the long term, "it will not be sustainable to keep building HD centres".

She said "there is a need to strengthen upstream measures including prevention", and to promote alternatives to HD such as kidney transplant and peritoneal dialysis (PD), which a patient does on his own outside a centre.

"PD provides more convenience and independence to patients as it can be self-administered, and can be done at home," she said.

"To make a concerted effort to improve PD uptake, MOH is currently working with the public hospitals and VWO providers to develop a national 'PD-preferred' strategy."

In Hong Kong, for example, three in four dialysis patients are on PD.

The MOH is also working to reduce the number of kidney failures with better care for diabetes patients, who account for more than three in five kidney failure cases.