The other nation builders 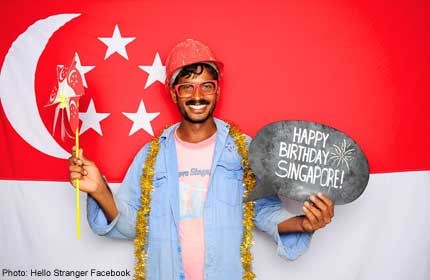 They wanted to put the people behind Singapore in front of the camera.

So a group of designers from local industrial design firm Stuck came up with the idea of erecting pop-up photo booths - similar to the sort popular at weddings these days - to celebrate and showcase migrant workers, especially those who work at construction sites.

Over a span of three days from Tuesday to Thursday, foreign workers queued up for their turn to pose with fun props like small flags and oversized spectacles.

The concept of the photo booth was developed over a lunch that the designers had together about three weeks ago.

Mr Yong Jieyu, a product designer who led the project, said: "We didn't want our project to be too serious as it should be celebratory and we wanted to present the serious topic of nation building in a lighthearted manner."

Added the 33-year-old: "We realised we needed a fun, engaging and visually attractive medium for this, and photo booths came to mind."

The photo booths were set up by a local photo booth company Hello Strangers.

Foreign workers who went into the booths received the photos on the spot, after they were taken with a DSLR camera and churned out with an instant printer.

The photo sessions lasted two to three hours each and were held at venues including construction sites and dormitories at Rowell Road, which is off Serangoon Road, Tuas and Woodlands.

The project cost about $200, which was split between the two companies.

In addition to the envelope of snapshots each worker received, they also enjoyed simple refreshments.

One of the foreign workers who participated at the event said he was touched by the gesture, as it was the first time he truly celebrated National Day.

"Since I came to Singapore in 1996, I've only gone to see the fireworks at Kallang and Marina Bay. This event was very nice for us. We had cake and some drinks and everybody was very happy.

"I have three photos, so I'm going to send one back home to my family," said the 42-year-old father of two, who is from India.

Mr Yong said he and his team are looking forward to doing something similar next year and celebrating a different group of people who contribute to Singapore.

"We were pleasantly surprised by the amount of fun the workers had and the support we managed to pull from friends and organisations.

"If this project continues, we will have a collection of different groups of people over the years," he said. The photos can be viewed at www.hellosingapore.sg