Our Singapore Conversation: What do we want? 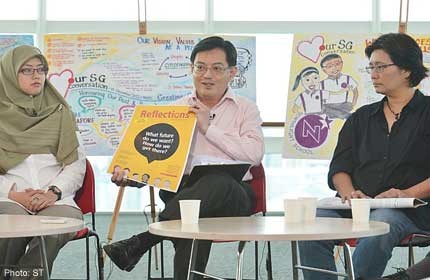 The end product of a yearlong process involving 47,000 people at 660 dialogue sessions chatting for a combined total of 1,645 hours?

For one, a report that crystalises the diverse hopes, aspirations and views of people here.

Plus, a survey they commissioned of 4,000 people threw up the same findings, he said.

People wanted a Singapore that allowed her people to succeed and live fulfilling lives, with safety nets that give peace of mind especially when it comes to health care and housing.

What kept cropping up was also this notion that the kampung spirit, encapsulating the notion of mutual support and help, be kept alive.

This snapshot view of what people want has already been informing policy changes.

Specific changes have been instituted, including extending MediShield to neonatal conditions. And there is more to come.

Prime Minister Lee Hsien Loong will announce more changes at the upcoming National Day Rally, changes that were influenced by the OSC.

One major change will be to the Primary School Leaving Exam, Mr Heng revealed.

Organisers said the year-long dialogue had been a "learning lesson" and had shown the way for constructive engagement.

People were also more aware that there were very different opinions out there.

Plus, being a participant in the dialogue improved the Government's ability to consult and engage, said Mr Heng.