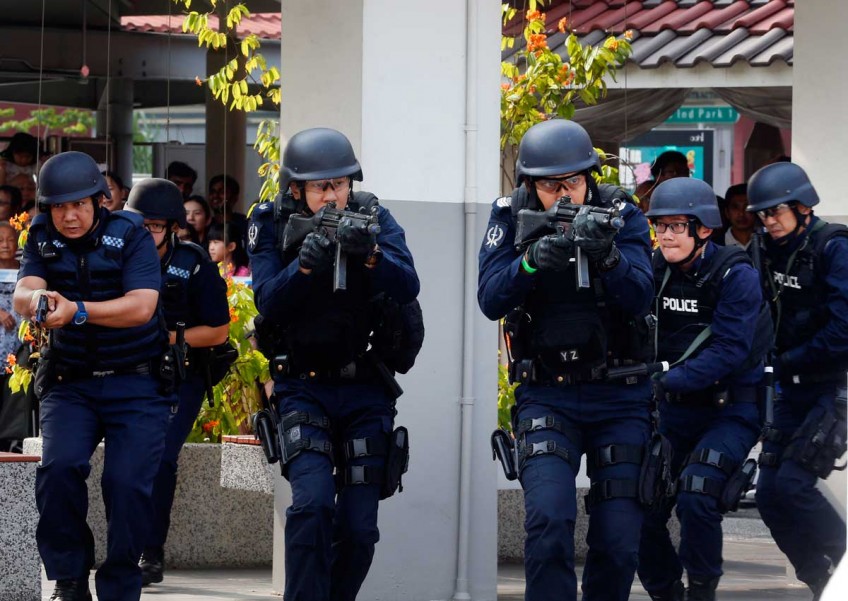 Home Team officers moving in on a coffee shop being attacked by armed “terrorists” yesterday, as part of an exercise on Emergency Preparedness Day in Teck Ghee.
The Straits Times

Grassroots leaders and volunteers across Singapore will be trained in psychological first aid, to help residents overcome the shock and mental distress following a terror strike.

Psychologists and counsellors from the newly formed Human Emergency Assistance and Response Teams will teach community responders how to identify and support those suffering from psychological trauma after an attack.

These professionals from the Home Team, Ministry of Social and Family Development and Institute of Mental Health will train responders from all 89 constituencies, to ensure each area can support affected residents and their families.

Prime Minister Lee Hsien Loong announced the initiative yesterday at an event in Teck Ghee to raise awareness about SGSecure, the national movement to increase the public's preparedness and resilience in the fight against terror.

Recent terror-related incidents in the region show the threat is serious, Mr Lee said, calling on Singaporeans to strengthen community bonds to minimise the repercussions of an attack. Terrorists would aim not just to hurt people, but also to divide Singaporeans, he said.

That is why Singaporeans should get to know their neighbours and make friends with people of other races. Every little act counts, he added, from holding the lift door open to offering snacks to others.

"The stronger our kampung spirit, the less able the terrorists will be to break us," said Mr Lee at Emergency Preparedness Day in his Teck Ghee ward, organised as part of the SGSecure outreach to neighbourhoods.

He encouraged residents to acquire life-saving skills such as using automated external defibrillators (AEDs), which have been installed at 55 housing blocks in Teck Ghee. The Government aims to install one AED for every two blocks islandwide eventually.

General manager Chong Hwa Heng, 48, was among the residents who learnt how to use an AED yesterday. "It's good to be prepared just in case of emergencies, you never know when you might need to use this skill," he said.

Mr Lee also urged residents to download the SGSecure mobile application, which has been updated with new features. The app can now provide users with customised alerts on emergency incidents occurring in specific locations in Singapore - such as office buildings, shopping malls or residential blocks - by keying in the relevant postal codes. This will inform subscribers of any emergency situation near the specified location.

It will also send subscribers news alerts on terror incidents in specific regions that Singaporeans have key interests in, for instance South-east Asia, East Asia and Europe.

Financial administration officer Iliya Shazni, 29, tried the improved app, and said he will use it to keep track of incidents near his home, his mother's workplace, and his younger sister's school. "It'll give me better peace of mind knowing that I'll be informed should any danger arise near them," he said.

Mr Lee also joined residents in viewing an exercise where "terrorists" attacked coffee shop patrons with firearms. It showed residents running for cover, assisting casualties, and calling the police, which dispatched their emergency response teams to take out the threat.

With the terror threat at a high level, the Government has stepped up its outreach to raise awareness and prepare residents to respond effectively in the event of an attack.

Community volunteers and Home Team officers have visited more than 50,000 households since the official launch of the SGSecure movement last September.

The authorities plan to engage schools and workplaces next.