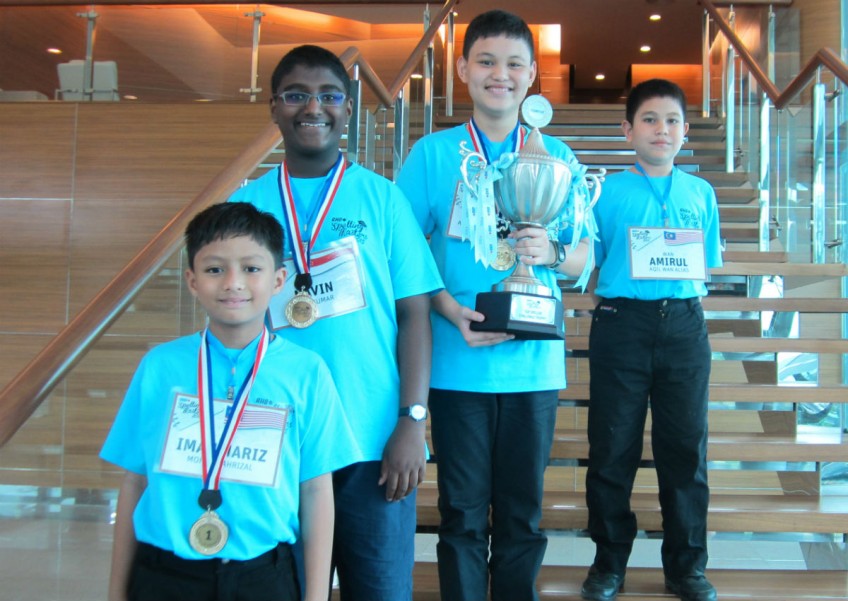 When it comes to spelling, Ryan Andrew A Salao, 13, is the best in Singapore, as well as Malaysia.

The Mayflower Primary 6 pupil was the top speller at the inaugural RHB Spelling Masters 2015 in Kuala Lumpur yesterday, after a five-round contest involving 20 contestants from both countries.

Jamie Aishirya Kumar, 12, Malaysia's champion speller from SK Sri Tebrau in Johor, was proud to be her country's top speller.

"It's awesome because at the last competition I was second, so it's nice to beat the first-place winner," she said, referring to Malaysia's RHB New Straits Times National Spell-It-Right Challenge, where she finished second to Karrthik Sathiyamoorthy, 12.

Besides the individual written round, participants also competed against one another in five teams made up of pupils from both sides of the Causeway.

The competition reached its climax in the fifth round, during which guests drew words like balbriggan, ecossaise, and legerdemain from a vault, with each worth 100 points.

Referring to the moment when the team spelt its 100-point word (balbriggan) and got it right, Ryan said: "My first thought was: We won! Just those two words."

Said Tan Sri Azlan Zainol, 65, chairman of RHB Bank: "Today is a culmination of what we have always wanted to do. Put the best of the two countries together. Not just Malaysia against Singapore, but Malaysia with Singapore."

The cross-border game play was designed by the award-winning Straits Times (ST) Schools team, chiefly its deputy editor, Ms Serene Luo. "We developed a format that would promote co-operation and make spelling fun in a way that a game-show might," said the 32-year-old, who was also one of the emcees for the show.

Other stalwarts from the Singapore competition who helped during yesterday's contest included an arbitrator, Mrs Soo Kim Bee, a teacher; and pronouncer Nora Samosir, a National University of Singapore lecturer. They joined Malaysian judge Ramesh Nair, an associate professor at the Academy of Language Studies Universiti Teknologi MARA.

Said Ms Serene Goh, 44, ST Schools editor and a judge for yesterday's contest: "It was great to watch national champions from both countries show off their chops. They were in fine form, competitive and confident."