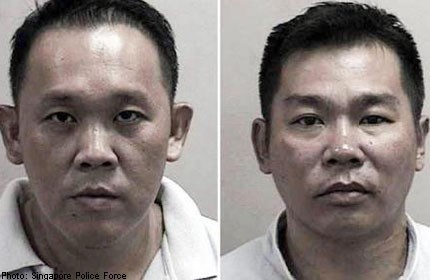 New Say Heong (left) and Oi Boon San were jailed 3 1/2 years and sentenced to six strokes of the cane.

SINGAPORE - Two attackers who slashed a man with breadknives were on Tuesday sentenced to 3 1/2 years each behind bars.

New Say Heong and Oi Boon San - who will get six strokes of the cane - set upon the 48-year-old at a coffeeshop.

The court heard they targeted him because he had been involved in an earlier dispute with an acquaintance of New's.

Wanting to teach him a lesson, the pair armed themselves with breadknives and confronted him at the coffeeshop at about 1am on Jan 4.

The victim tried to run but collapsed a short distance away, whereupon his assailants continued attacking him.

New's lawyer Looi Wan Hui said his client was an alcohol and drug abuser who was remorseful.

He added that Mr Teo had allegedly hit a friend of his called James.

But the prosecution told the court that investigations did not bear this out.

Mr S.S. Dhillon said Oi was suffering from intellectual impairment and had been "absolutely foolhardy" to help New as he had nothing to gain.

The maximum penalty for causing grievous hurt is 15 years in jail, a fine and caning.