Pamper your pooches with healthy meals delivered right to your doorstep

Amid a nationwide push for healthier food, guess who else are having bowls of brown rice, lean meat and veggies for their meals?

Businesses offering home-made fare for dogs have sprouted up in Singapore in recent years, promising nutritious and fuss-free food options for pets.

One of them is Furries Fresh Food, which opened in September last year.

On the menu are four main recipes, including Beef & Pumpkin and Salmon & Brown Rice, and customisable kangaroo meat meals. Customisation of other meals is also available upon request.

Furries Fresh Food owner Erlena Tan, who prepares and delivers orders all by herself, sees to it that each meal is a wholesome mix of protein, complex carbohydrates and vegetables.

For the four recipes, she consulted a nutritionist to ensure they suited a canine's needs, and had them sent to the Agri-Food and Veterinary Authority of Singapore (AVA) for tests and certification.

What inspired her to become so dog health-conscious?

It was an unfortunate episode some years ago when her dog fell sick and died prematurely that triggered her quest for healthier pup food. 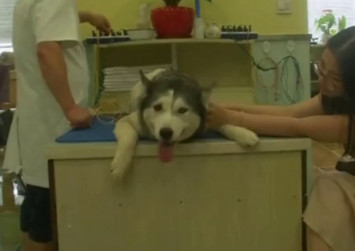 "I did a lot of research on why it happened, the causes, prevention and what we could do about it. That also led me to find out a lot about nutrition and how it can prevent many illnesses in animals," Tan told AsiaOne at her shop at Jalan Pelikat.

"I started this business because I want to help the animals and it's my way of paying back to society," the former country manager at a multinational company added.

Also motivated by personal experiences to set up a similar business are Sandee Goh and Rachel Pereira, co-owners of three-month-old The Grateful Dog at Changi Road.

Pereira has a Boston Terrier named Lucy, which used to be underweight while Goh's beagle, Clash, was overweight and bogged down by skin problems.

The two friends began looking for natural ways to treat their pets.

"One of the most obvious ways was through the food we gave them," Goh told AsiaOne.

The dogs were put on a fresh food diet for over a year and both reached a healthy weight. They were also sporting healthier and shinier coats, and Clash's skin problems reduced drastically as well, Goh and Pereira pointed out.

Having observed the results of a healthy diet, the pair, both 30, decided they had to spread the word to other dog owners, so The Grateful Dog was born.

Customers can choose from beef-, chicken- and pork-based meals - all of which contain at least one type of superfood and an organic supplement blend. For instance, the beef-based meal comes with super veggies such as bell peppers, spinach and sweet potato, and is supposed to provide the different types of nutritional benefits a dog needs.

The recipes were vetted by veterinarians (pun intended) and, like those at Furries Fresh Food, were sent to the AVA for tests and certification.

Price-wise, these hearty food packages cost a premium if you're used to buying dry and wet dog food from the supermarket.

A search online shows that there are at least four other similar businesses in Singapore, and they are priced competitively for these "human-grade" dog food.

Yes, it seems like the clean-eating trend has spread to our pup friends.

Would you spend a bit more to let your pup eat clean? Let us know in the poll below.