[UPDATE June 29]: AsiaOne understands the two sides have agreed to settle this privately.

Murali Pillai has addressed claims by a netizen who said he was less than empathetic to her pressing housing issues.

In a post made on Saturday (June 27) which has since been removed, Carissa Chua recounted two occasions in which she had felt let down by Pillai, who was her MP in Bukit Batok.

She described how she had met him at a Meet-the-People Session (MPS) to make an appeal to purchase a flat that would house herself, an elderly aunt and her ageing parents, who are not married.

She explained that she is in her early 20s and her parents “do not have sufficient income/CPF and are too old”. They had also lost their flats before due to retrenchments and scams, Chua added. 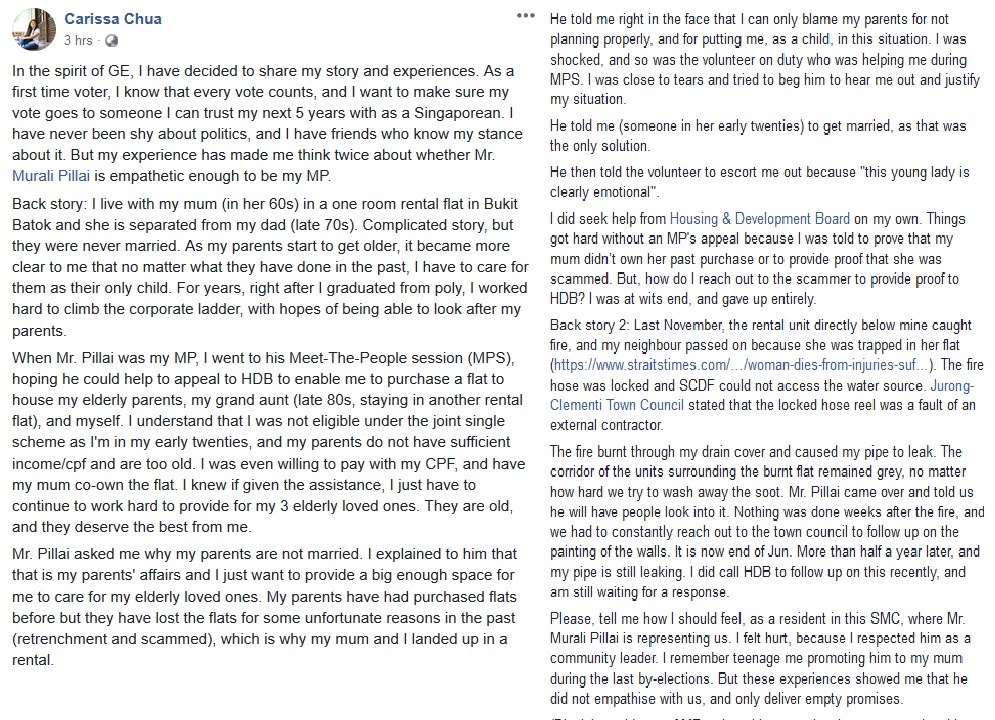 She wrote that the response she received from Pillai, however, shifted the blame to her parents instead, “for not planning properly” and for putting her in such a situation.

Chua described how she was “close to tears” at that point and “tried to beg him to hear me out”.

His response to her was to “get married, as that was the only solution”, wrote Chua.

In a second example, Chua described how a fatal fire below her rental flat last year had damaged a pipe in her home, causing it to leak. The fire had also led to hard-to-remove grey residue in the corridor of units surrounding the burnt flat.

“Nothing was done weeks after the fire, and we had to constantly reach out to the town council to follow up on the painting of the walls,” said Chua, adding that “more than half a year later, and my pipe is still leaking.”

Friends, some of you have asked me about Ms Chua’s FB post that appeared yesterday relating to her experience at MPS,...

In a Facebook post on Sunday (June 28), Pillai acknowledged that the events described at the MPS had “occurred some years back”.

Pillai said he reached out to Chua yesterday to understand her current situation and how he can help.

“I assured her that she need not change her opinion of me,” wrote Pillai.

“I am glad that she has given me the opportunity to assist her. We also mutually agreed to keep the details of her case confidential,” Pillai added.

In an indication that elections are near, this case is just the latest in a series of complaints and criticisms lobbed against candidates recently.