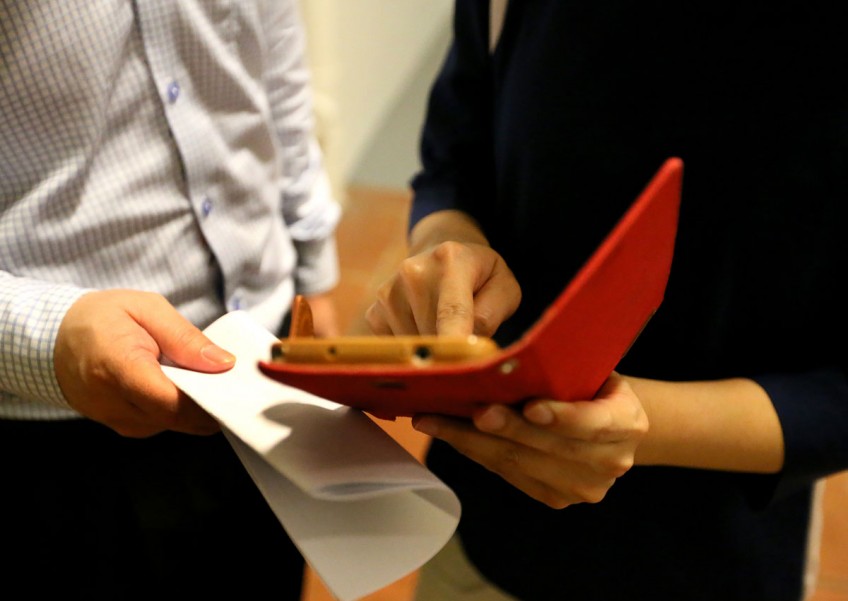 Parents of child that was abused by their maid tell their side of the story.
The New Paper

They were happy with their maid as she was efficient and their toddler liked her. So much so that they treated her like a member of the family.

Imagine their horror then when they found out that Tursinah Sari, 32, had been abusing their youngest child who had turned one not too long ago.

On 15 occasions, the Indonesian had ill-treated her charge in various ways, including dangling him upside down from his ankles, spinning him around like a rag doll and dropping him head-first into his cot.

And it was only by chance, and a mother's instinct, that his parents discovered the abuse after watching footage from a closed-circuit television camera in their home.

On Tuesday, Tursinah was jailed for 12 weeks after pleading guilty to six out of 15 charges of ill-treating the child.

The boy and his parents cannot be named, to protect his identity.

Speaking to The New Paper yesterday, the parents, who are in their 30s, said the abuse came as a huge shock as they had a good relationship with Tursinah.

Said the father: "We treated her well, and she even said that she felt like a part of our family. But she was a totally different person behind closed doors, someone we didn't know at all. There were no tell-tale signs of the abuse."

On the evening of Feb 4 this year, his wife saw Tursinah lift their son out of his cot by his shirt when she decided to check the live CCTV footage from the boy's room.

They had installed the CCTV cameras in the common areas and bedrooms a few years ago for "peace of mind" and to "stay connected" with their children at home.

The couple, who have two other children, would watch live and recorded footage on their smartphones whenever they missed their kids.

It was routine for Tursinah, who worked for the family for five months, to put the toddler to sleep in his room around 7pm while the rest of the family had their dinner.

They said that Tursinah was never alone at home with the baby as either of the couple's parents would come over every day while they were at work.

The maid was left alone with the boy only when she put him to sleep in the evening and during his bath time.

The mother said: "I wanted to check if she was having trouble getting him to sleep as he had a late nap that day. I didn't want to open the door in case I disturbed him, so I checked the live footage on my phone."

She thought the "rough handling" was just a one-off and later told Tursinah to be gentler with the boy.

But she could not stop thinking about the incident the next day while at work, and her mother's instinct kicked in.

"I felt uncomfortable, so I decided to check footage from previous days and discovered that it wasn't a one-time thing. I couldn't believe my eyes and was literally trembling in disbelief and anger as I watched her abuse my son," she said.

After viewing a few days of footage, she could no longer bear to watch. She asked her husband to continue checking the recordings.

He said: "I watched the recordings until 5am the next day, and I felt my emotions building up each time I saw her ill-treat my son. Seeing her turning, tossing and spinning my son made my heart break."

The couple said the older kids had not complained of abuse by the maid.

They made a police report on Feb 6, and Tursinah was arrested that very day.

The boy was examined at KK Women's and Children's Hospital that day and had no external injuries.

The father said he knew about Tursinah's conviction and sentence only when TNP approached them on Tuesday.

He said he had received a call from the Immigration and Checkpoints Authority on Wednesday informing him that Tursinah had been released from jail as the sentence had been backdated to Feb 8.

The couple were upset that Tursinah had told the judge that they had not paid her salary for five months. This led to some online criticism of them, and some relatives had also questioned them about it.

The couple said this was not true as they were keeping the money for Tursinah. (See report at right.)

They said that they decided to make a police report as they did not want the same abuse to happen to another family.

Said the mother: "I did wonder if it was harsh of us to make a police report. But I didn't want her to be passed to another family where she could do the same thing."

Her husband added: "We hope my son won't remember any of this. He is a strong and happy-go-lucky child. The paediatrician told us the only thing we can do now is to observe him and shower him with love."

In her mitigation plea, Tursinah Sari, 32, who was jailed for abusing her employers' son, claimed that she was owed five months' salary.

But her employers dispute this.

The couple told The New Paper yesterday that they had a written agreement with the maid stating that they would hold on to her monthly salary for safekeeping.

They also said they had paid Tursinah's loan for her to come to Singapore, and the loan would be offset by six months of her salary.

And the money they kept for her amounted to only a few hundred dollars as it was payment for when she did not take a day off.

Tursinah worked for them for only five months.

"We kept the money in a safe and made sure she signed off each time we paid her. She was allowed to 'withdraw' money any time she wanted and she wasn't afraid to ask us for it," said the mother.

"The amount wasn't enough to open a bank account, but we had planned to do that if she stayed with us longer."

The couple said they had asked Tursinah if she preferred to keep the money, but she did not want to.

The father said after buying a $114 plane ticket for her to return to Indonesia, he handed her the remaining $185 owed to her through an officer at the Immigration and Checkpoints Authority yesterday afternoon.

The Ministry of Manpower website advises employers not to hold their maids' salaries for safekeeping as this could lead to misunderstandings if things go wrong.

Its guidelines state that employers should allow their maids to manage their own salaries to minimise unnecessary misunderstandings.

Maids R Us director Graham George Spencer told TNP that if employers do hold on to their maids' salaries, there should be some form of written agreement to protect the parties involved.

"You have to get the agreement written down as proof. And each time the maid gets paid, you have to provide a receipt.

"A verbal agreement isn't enough, otherwise each party can say whatever they want," he said.

Between Dec 25, 2015, and February this year, Tursinah Sari ill-treats the boy a total of 15 times when she could not get him to fall asleep.

She starts abusing the toddler, who is between 14 and 16 months old at the time, by forcefully pulling him upwards by one of his arms.

From then on, she continues manhandling him, sometimes up to three times a day.

On Jan 27, she drops him on a sofa before pressing his ribs with both her hands.

On Feb 1, she forcefully pulls him out of the cot by grabbing his legs. She then spins his body around to face her while he is dangling upside down.

On Feb 5, the boy's parents watch CCTV footage of the abuse and call the police the next day.

On April 19, Tursinah pleads guilty to six counts of ill-treating the child and is jailed for 12 weeks.

The maid, who is not represented by a lawyer, says in her mitigation plea that her employers owe her five months' pay.

District Judge Luke Tan replies that she would have to seek a separate recourse for this matter.

Tursinah's sentence is backdated to Feb 8, the date of her remand.

For each count of ill-treating the baby, she could have been jailed up to four years and fined up to $4,000.

This article was first published on April 23, 2016.
Get The New Paper for more stories.