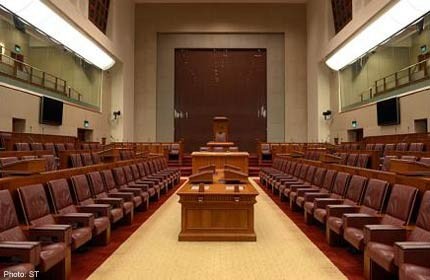 SINGAPORE - Parliament is set to take a customary mid-term break next year to take stock of its work and let the Government map out a new legislative programme.

Prime Minister Lee Hsien Loong said on Thursday he intended to prorogue Parliament in the coming year, a move which would terminate the session and effectively hit the reset button.

"When Parliament sits again (in the second session) we will set out the next half-term, establish a fresh starting point for the rest of the term, set a direction - which I think, most likely, we will do next year," said Mr Lee at a dialogue on the National Day Rally last night.

Mr Lee made the announcement in response to a question from National University of Singapore student Soh Yi Da, 24, who asked for the Prime Minister to give the Government a "mid-term report card" with marks out of 10.

"Students never give themselves report cards. They wait for the teacher," quipped Mr Lee.

But he added that a "progress report" was on the way - when Parliament is prorogued. While saying he would not "try to give (himself) a grade", he did note that the past two years have been busy in policy areas such as housing, health care and education.

Grades were on the minds of some of the other 60 young people taking part in the dialogue held by the National Youth Council in the Lasalle College of the Arts. One asked if doing away with the Primary School Leaving Examination T-score would nurture "youngsters who cannot stand up to competition or comparison".

To this, Mr Lee said doing away with the T-score did not mean doing away with grades or results: "I don't think we are in danger of sitting back under the coconut tree and relaxing... I think we should help children in school set the right balance."

Volunteerism was another hot topic, with Acting Minister for Culture, Community and Youth Lawrence Wong also taking part in the dialogue and many participants involved in voluntary work. Some worried that the formation of a volunteer youth corps might over-institutionalise volunteerism.

Mr Wong said that policy-makers, too, had that worry. "We were cautious, we didn't want to end up stifling that spirit."

But rather than institutionalising service, the youth corps aims simply to provide opportunities and resources, he said.