Singaporean teenager Max Maeder channelled the sportsmanship of Formula One great Jackie Stewart in winning kiteboarding gold at the Youth Sailing World Championships in Oman, attributing his success to his passion for training no matter the “grind”.

The 15-year-old won 14 of 18 races in the Kiteboarding FormulaKite class in a dominant performance off the Mussanah coast – mindful of the words uttered by three-time F1 champion Stewart, who once said: “It is only those who have won with integrity and care, over an extended period of time, who have become universally regarded as successful.”

“It’s the same as any other athlete who performs at a high level. The main thing is I have a great support network, I have a lot of great people helping me,” said Maeder.

“And I put in a lot of work. I like to believe I have a lot of drive, passion and in general want to be competitive and win. If you combine those together, I believe that is what helps me win.

“[As Jackie Stewart said], if you win dirty it isn’t really a win. And just because you’ve done it once, doesn’t mean you’ve done it all. You have to do it consistently and then you can really consider yourself a champion,” Maeder said.

The kiteboard is sailed on a foil and each race lasts typically between 11 and 16 minutes. Maeder, who is of Swiss and Singaporean heritage, recently won a youth world championship in Europe in a tournament dedicated to kitefoiling. The Oman competition featured other classes and boats.

Maeder’s competitiveness allows him to stay consistent in his training. He knows winning is not easy and but he takes failure as an excuse to work even harder. 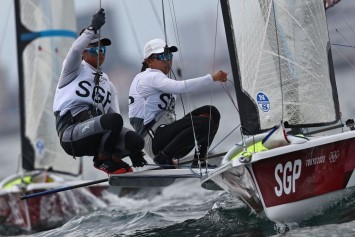 “It puts more frustration on me if I don’t perform, but I don’t see it as pressure,” he said. “Win or not, I’m still going to be learning and improving. If I don’t win, it drives me to train harder, learn and do better. But I didn’t feel under too much pressure.

“I enjoy the grind. If you go for a month’s training period, if you do a summary of it, it’s almost the same thing day in day out. But when you come out of it, the gratification of it is so great and long lasting, I really love it,” he said.

“It’s such a great experience during the training period. I really don’t mind it much. I love it. If I’m training and I feel stuck in a loop, I don’t think I can feel burned out.”

If the training can feel like a loop, the racing never does. “There are very few set things in kitefoiling – the wind, the water conditions, the size of kite you pick, the competitors, the course length – there are a lot of things that are constantly changing,” Maeder said.

“On the water too, you are riding waves, riding currents, you have competitors around you. All this diversity and change makes it really exciting and it makes it really hard to manage.”