The past is still present 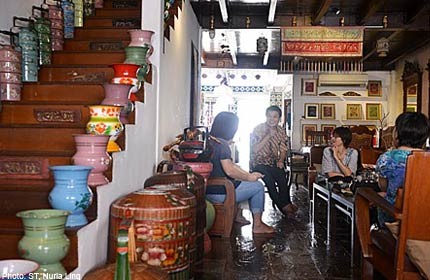 Mr Alvin Yapp, owner of The Intan Peranakan Private Museum, giving a tour of his home to Japanese visitors. Katong boasts about 800 conservation buildings, a repository of heritage shored up by oral history.

SINGAPORE - Forgetting that it is near impossible to find parking, my husband and I head to Katong for dinner, hoping to find what we love about it - a sleepy enclave in semi-disrepair.

Then, like tourists, we are agog: Odeon Katong Shopping Centre is now Cornerstone Community Church? Why is this Alibabar Hawker Bar where my beloved tau kwa pok stall used to be? How did 112 Katong suddenly spring up?

We moved out three years ago, just as the district decided to get hip, and can't quite reconcile with the Katong of 2013: trendy hotels and retailers, fancy pet groomers, yuppies sipping exotic wines. So, feeling displaced, we snarl at the new eateries where once sat our favourite zi char stalls.

Of course, I should be used to these who- moved-my-cheese moments. After all, Katong has been in makeover mode for decades.

But as a third-generation Katongite, I find it hard to let go of the past. Instead, I look for time travel moments - kopitiam uncles who remember their regulars; stalwart businesses that have survived soaring rentals; kaya toast from Chin Mee Chin Confectionery.

That's when it hits me: Katong isn't just a physical place any more, but an emotional yearning. As a monument of the collective imagination, it represents a part of Singapore's history when lifestyles were more focused on beach than bounty, when bibiks rode trishaws and policemen wore shorts.

It doesn't exist; not as one thing you can point to.

Not like Hill Street Police Station or St Andrew's Cathedral - specific buildings officially designated by the Preservation of Monuments Board for their special archaeological, architectural or artistic value.

Rather, Katong is precious because its various elements testify that here, Peranakans and Eurasians - indigenous groups now much diluted - once lived, worked and played.

The district is loosely bound by Changi Road and Geylang Serai, Marine Parade towards the south, Tanjong Katong in the west, Still Road in the east.

In the entire zone are about 800 conservation buildings, a repository of heritage shored up by oral history, through stories that capture its distinctive character.

Family accounts are linked to a raised terrace house in Onan Road, now a rebuilt 21/2-storey inter-terrace, where my Peranakan grandparents lived for more than 30 years.

In the 1930s, they paid $6 a month to an Arab landlord for a two- bedroom dwelling. Their three sons shared one room, and their three daughters crowded in the other with them.

During the day, the kids played hide-and- seek under its floorboards while waiting for the duck rice hawker; at night, the older ones snuck in through its windows after they stayed out too late.

From the same windows, one aunt peered at a street charged with racial tension in 1964, afraid of the next fight between Chinese and Malay groups.

Whatever happened, the girls walked each day to St Hilda's Girls School in Ceylon Road.

Another aunt recalls going several times a week to the Joo Chiat-Changi Market with her mother in the 1950s, dreading its pungent smells and slimy floors.

They all remember weekend family outings at Siglap beach for swims that might well result in an encounter with washed up urns of cremains.

Their relatives and friends had lived there too. One grandfather resided in Marshall Road, another in Geylang, with numerous aunts and uncles in between. Chinese New Year visits spanned one end of Katong to the other.

By the 1960s, rents had risen to $40 a month. When higher property values prompted their landlord to sell the place, my grandparents quit Katong for an HDB flat in Toa Payoh.

Even so, throughout the 1970s, they returned several times a week to socialise at the Gunong Sayang Association at Ceylon Road, singing dondang sayang and playing mahjong.

In line with tradition, my mother enrolled me in St Hilda's, though by the 1970s and 1980s, it had become modest compared to newer, better- equipped schools. It did mean that my growing- up years were, like hers, hitched to Katong: feasting on East Coast Road treats, and laughing with classmates from every race and creed who shared an irreverent Katong humour.

By the 1990s, however, many of the area's oldest buildings had become dilapidated - some were even condemned.

Its walk-ups were ratty, as were its hotels such as Sea View and Paramount. Joo Chiat had developed a certain seediness, and youngsters were warned to stay away from the Red House Bakery because it could cave in at any minute.

The most active nightlife denizens were large rats that rummaged through rubbish bags along East Coast Road.

Along with its fading surroundings, the culture of Straits-born Chinese lost its lustre too, and Peranakans were often written off as "orang cina bukan cina" - inauthentic Chinese people.

Singapore might have chosen to raze what was left, turning Katong into a new estate. It did not.

So it settled on an awkward compromise - shophouses and residences would be conserved, but plot ratios and purposes adjusted to accommodate more people.

The result, truth be told, is in many parts an eyesore.

But leaving Katong to decay or replacing it all with high-rise condos would have been disastrous. At least this way, there is enough of the old to trigger the imagination, if you know where to look.

I cannot say parking is fun. But Katong remains for any visitor a corridor to our past, as it has always been for me.

This nasi padang restaurant serves time travel on a plate. Soulful dishes, such as tauhu telor (tofu omelette), are a throwback to its Indonesian heritage.

The nation's first air-conditioned mall opened in 1973. It supplied anxious Katong mothers school uniforms and spectacles for their children.

Today, it looks like a tired, blue-and-yellow mash-up. But inside are optical shops in existence for over 30 years, and the practice of old-time exorcist, "Ghostbuster" Mr Chew Hon Chin (#B1-28).

What is today a church for years housed a school. Founded in 1929 by Mr K. Abraham as Bethel English School, it went from a mixed to an all-girls' school in 1950. In 1998, the school population moved to Tampines, and now accepts boys and girls.

If Peranakans cannot make it themselves, they buy it here.

Step into the home of Mr Alvin Yapp and you half expect a matriarch of yore to appear, such is his evocative display of baba collectibles.

His two-storey home, facing conservation houses around the Everitt Road area, is lovingly decked out with painted tiffins and ornate china, mahogany furniture and antique Peranakan tiles amassed from Malacca, Penang and an international baba diaspora.