Patient here is 1st Asian to get new heart pump 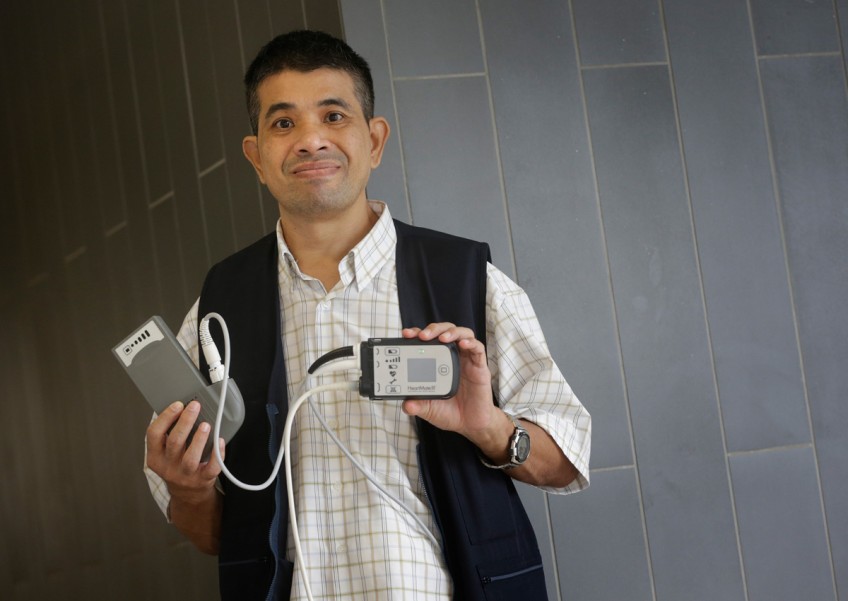 A new heart pump - that has shown improved survival rates and fewer heart failure symptoms for advanced heart failure patients in a trial - has been implanted in the first patient in Singapore, said the National Heart Centre Singapore (NHCS) yesterday.

A one-year trial, involving 50 patients from six countries, showed a survival rate of 92 per cent among them, and 83 per cent had fewer heart failure symptoms.

Last November, the device was implanted in Mr Rajamohan Pekrisamy, 44. He was also the first in Asia to receive it. Called The Heartmate 3, the pump aims to keep patients on the waiting list for donor hearts alive. Implanting this new pump costs $218,000, but with an 80 per cent subsidy, Medisave and other plans that offset the cost, Mr Rajamohan did not pay any cash out of pocket.

He said: "Before I had the implant, I was very tired and could walk (the distance of) only one or two bus stops. Now, I can walk much further and I have better appetite."

Adjunct Associate Professor Lim Chong Hee, senior consultant at the department of cardiothoracic surgery at the NHCS, said: "We are always on the lookout for new technology for patients who are very sick, and heart transplants are not so readily available. Without the heart assist device, fewer than half of these patients will survive beyond one year just on medications alone."

The new device uses a new technology that aims to reduce the risk of blood clots forming. It is also the first heart pump that has an artificial pulse that mimics the natural heartbeat, reducing the likelihood of blood clotting. Two lithium batteries ensure that the patient can move around for about 17 hours before they need to be recharged.

On average, there are three heart transplants a year under the NHCS Heart Transplant programme.

The Heartmate 3 is the third type of heart assist device introduced at NHCS. The two older devices, still in use, have survival rates of about 91 per cent and 90 per cent each.

To date, 67 of such devices have been implanted. The NHCS expects to see about 15 implants a year.

This article was first published on Jan 22, 2016.
Get a copy of The Straits Times or go to straitstimes.com for more stories.