Paya Lebar Airbase to make way for homes and industry 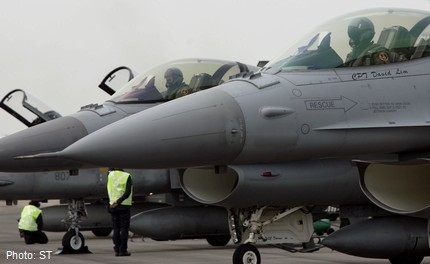 A new military airbase and a fourth runway will be built at Changi East, Prime Minister Lee Hsien Loong said in his National Day Rally speech on Sunday.

A new military airbase and a fourth runway will be built at Changi East, Prime Minister Lee Hsien Loong said in his National Day Rally speech on Sunday.

Paya Lebar Airbase will be moved there later on. This will free up an area bigger than Bishan and Toa Payoh - around 800 ha - for new homes, offices, and factories.

Relocating the airbase also removes height restrictions around Paya Lebar and frees up the authorities to develop new and exciting plans for the eastern part of Singapore.

PM Lee also touched on other bold plans that are in progress.

These include building a new port in Tuas which is bigger and more efficient than current facilities, to maintain the country's premier position as one of the world's leading ports.

All container ports in Tanjong Pagar, Keppel, Brani and Pasir Panjang will be moved there when leases expire from 2027.

This will also free up prime land in Tanjong Pagar, where a new southern waterfront city will be built. Occupying a space of about 1,000 ha, or 2.5 times the size of Marina Bay, it will stretch from Shenton Way to Pasir Panjang.

There will also be a fifth terminal at Changi Airport, to double its current capacity.

PM Lee said the plans were examples of how Singapore needs to think and plan for the future.

"If we can carry off these plans, we will not have to worry about running out of space or possibilities in Singapore," he said.