People in Singapore spend over 12 hours on gadgets daily: Survey 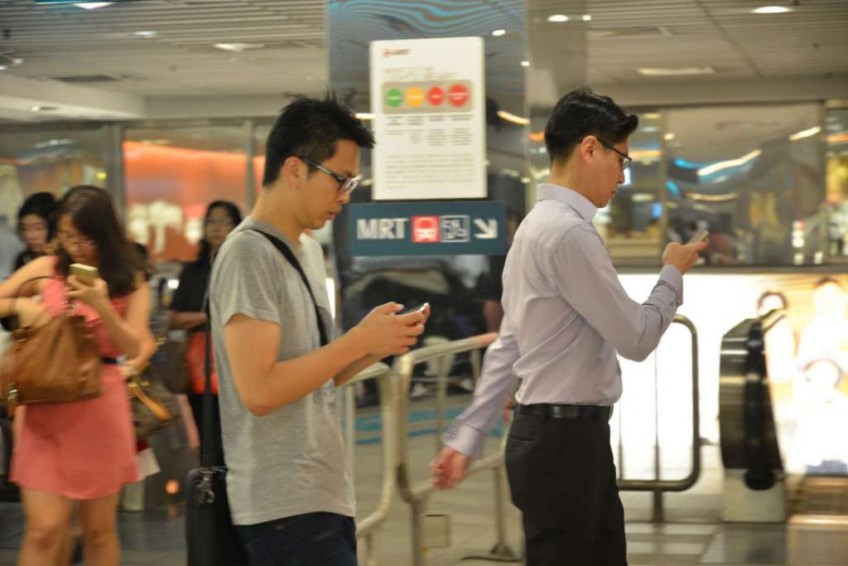 Singaporeans spend an average of 12hr 42 a day on digital devices.
The Straits Times

Like it or not, gadgets have become a key part of people's lives in Singapore, as consumers spend most of their waking hours on digital devices - 12hr 42 min a day on average.

And spending so much time has had both a positive and a negative impact on people's lives, in areas such as their relations with others and sleep.

This is according to survey findings released in February on the impact of digital devices - such as mobile phones, tablets, computers and video game consoles - on people.

Accounting for the most time spent on a gadget in a day on average is the mobile phone, at 3hr 12min.

The top gadget people use here is also the smartphone, with 95 per cent saying so, and its effect on people is telling - almost 80 per cent of them check their smartphones when waking up in the morning or just before going to bed.

While many - nearly 30 per cent - said that their sleep has been negatively affected by mobile gadgets, a similar number said there has been a positive impact.

Even so, about 70 per cent have enjoyed a boon in communications with their friends and are better able to complete personal errands and multitask, thanks to smartphones and tablets.

The study by consultancy Ernst & Young (EY) polled 1,000 people aged 18 to 69 who resided in Singapore for at least a year and had access to the Internet.

The top online activity they engaged in using their gadgets daily was reading personal e-mails, with 90 per cent of respondents doing so.

But the heavy use of digital gadgets is not without issues.

About a third of respondents admitted that they were addicted to smartphones and tablets.

A visual merchandiser who wanted to be known only as Ms Mary O., 26, said her smartphone causes her to lose three to four hours of sleep every night.

"Most of the time, I am playing (mobile) games like Bejeweled. It gets addictive as you just want to reach the next level in the game," she said, adding that she usually sleeps at around 3am.

She uses her smartphone while commuting and at work as well. But she noted that there is a positive side as "it allows me to connect with relatives and friends overseas".

Sleep is an issue that university student Nataniel Wong, 22, faces as well. He uses his devices for about 12 hours a day: Five hours for school work and seven for browsing the Internet and social media. "This has pushed my sleep time to later in the night, usually past 2am," he said.

Read also: This pendant is perfect for those lazy to type

Housewife Linda Yeo, 54, spends five to six hours on her phone daily, but said her habit of checking her phone before turning in at 11 each night does not affect her sleep. "Even if I am not using my phone before that, I will be watching television," Madam Yeo said.

Others are affected by more physical issues. University student Gracia Ow, 20, said she uses her laptop so often that her "back and shoulders ache all the time". She added: "I use my laptop and smartphone for close to 16 hours a day. Most of the time I am doing schoolwork, but I am also on social media for around two hours."

Read also: Hypertension on the rise in kids due to high-salt diet, frequent gadget use

There are social and health consequences too, said Dr Netzley.

"We wake up throughout the night, checking our devices and damaging the quality of all-important sleep and recharging... People stare at their devices, walk wherever they want without looking and simply do not care about anyone else," he said.

To address the problem, digital discipline should be taught in workplaces, schools, places of worship and even the media, said Dr Netzley.

'Do more to boost e-commerce'

Singapore may be digitally savvy but more can be done to enhance e-commerce here, a study released by Ernst & Young in February has recommended.

The study, which polled 1,000 people in Singapore last May, found that almost half - 49 per cent - do online research for a product in a store or at the point of purchase.

The top online activity they engaged in monthly or more frequently, on gadgets such as smartphones and computers, was banking and finance, with 89 per cent of people doing so.

A distant second was online grocery shopping at 47 per cent.

Some 55 per cent said they would like to be able to buy from more retailers online as well.

Ernst & Young Asean advisory digital leader Jonathan Rees said the findings show that "digital experiences are not just about online shopping and e-commerce". "For Singapore retailers, there is a significant opportunity in merging the brick-and-mortar store with digital experiences.

"What is certain is going digital is no longer a 'wait- and-see' but a 'catch-and- act-now' imperative. Organisations must be ready to reset their customer strategies if they want to successfully capitalise on the growth potential of the digital economy."