Pest control officer who asked for bribe jailed for 3 weeks 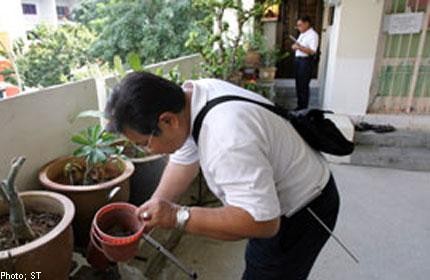 SINGAPORE - One of three pest control officers who allegedly tried to solicit a $100 bribe from a vegetable seller caught for mosquito breeding not only lost his job, he was also jailed for three weeks by a district court on Friday.

Muhammad Fahmy Mohd Esa, 31, pleaded guilty to asking Mr Tan Boon for the bribe in return for not reporting the violation to the National Environment Agency (NEA).

The employee of ACE Pest Control had been deployed to the NEA as a pest control officer. His duties included conducting inspections to check for mosquito breeding, rat burrows and termite mounds.

In April last year, he had found stagnant water at Mr Tan's stall in Bedok South and advised the 39-year-old not to repeat the mistake.

Two weeks later, on April 25, he found that the stagnant water was still there and there were mosquito larvae this time.

Muhammad Fahmy called in two colleagues to confirm this.

Mr Tan kept pestering the pest control officers to help him out by pouring away the water. He offered them $50.

Muhammad Fahmy asked for $100 and Mr Tan walked away.

After investigations were concluded, the trio were charged. Muhammad Fahmy is the first to be prosecuted.