Petition to move monkey from Kent Ridge Park to UK gets over 2,800 signatures 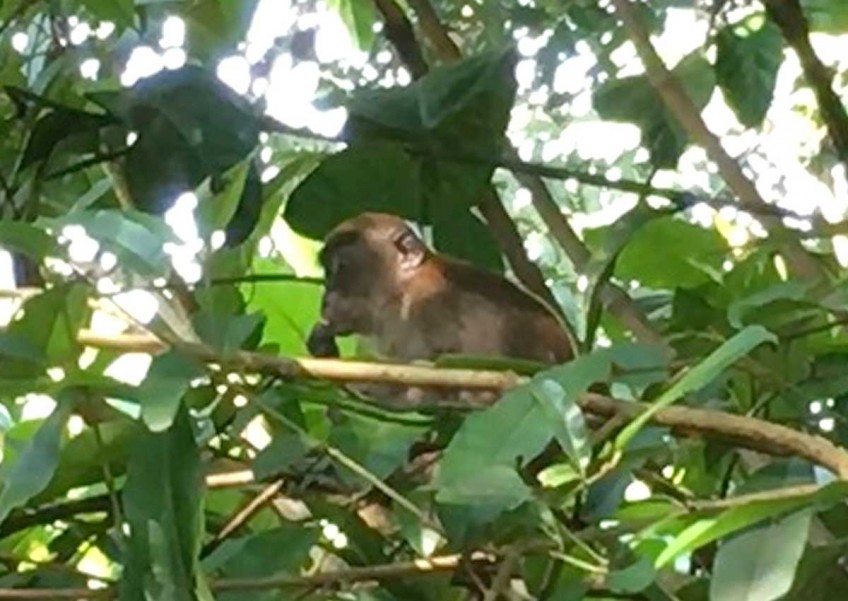 An online petition by a UK monkey sanctuary to re-home a monkey from Singapore has garnered over 2,800 signatures.

The petition organiser, Mrs Jan Garen, director of Wales Ape and Monkey Sanctuary, said she wants to raise more awareness of the issue.

She told The New Paper last Thursday that she had been waiting for the Agri-Food & Veterinary Authority of Singapore (AVA) to clear the way for the monkey to be sent over.

Her sanctuary is in Swansea, Wales, and rescues unwanted or mistreated monkeys from zoos and laboratories around the world.

She told TNP that she first heard of the long-tailed macaque from a family in Singapore that is willing to pay for the cost of up to $6,000 to ship the monkey over.

The monkey has been spotted in Kent Ridge Park.

A 70-year-old woman, who declined to be named, lives at nearby Normanton Park condominium, and has befriended the monkey, whom she calls Chippy.

When TNP visited the park last Thursday, the monkey appeared among the trees in front of a pond, just as the elderly woman arrived.

Commenting on how it looked dirty, she tried to wipe it with a cloth, but was greeted with shrieks from the animal.

Despite her assurances that it was very friendly, the monkey - which appeared to be a juvenile - looked aggressive at times and even bit her right forearm.

But the woman brushed off the bite, saying it was not serious, and continued cooing over the animal.

She claimed that people cycling through the park have almost run over the animal, and she was concerned for its safety.

Mrs Garen said that after sending her requests to AVA on June 15, she had not heard from it so she started the petition on June 24.

She said the monkey had "nowhere to go".

What about leaving it in the forest as a wild animal?

She replied: "It's not safe there because people in the park have chased him with sticks."

She found this out from people who messaged her on Facebook, she said.

Mrs Garen understands that there has been complaints from the public and that it could lead to the culling of Chippy.

She also maintains that her sanctuary has the experience of looking after macaques even though the species lives in tropical climates.

Mrs Garen said the sanctuary has rescued six long-tailed macaques previously from laboratories, pet shops and even from a ship in Malaysia.

Most of the people signing the petition - 90 per cent - are from Singapore, she added.

A joint advisory by AVA and National Parks Board (NParks) said they have received eight monkey-related feedback from the vicinity of Kent Ridge Park between January and June 28 which were all about a lone monkey.

The executive director of the Animal Concerns Research & Education Society (Acres), Mr Louis Ng, said he is aware of the online petition and has urged the authorities not to cull the macaque.

He told TNP that feeding is the root of the problem as it will start to rely on people for food.

Mr Ng, who is also the MP for Nee Soon GRC, said of the elderly woman who has been feeding the monkey: "I don't doubt that she loves the monkey, but it's a wild monkey and the monkey will be more aggressive."

A joint advisory by AVA and NParks advised the public against feeding monkeys as this alters their natural behaviour.

Illegal monkey feeding carries a fine of up to $50,000, jail up to six months, or both.

This article was first published on July 5, 2016.
Get The New Paper for more stories.