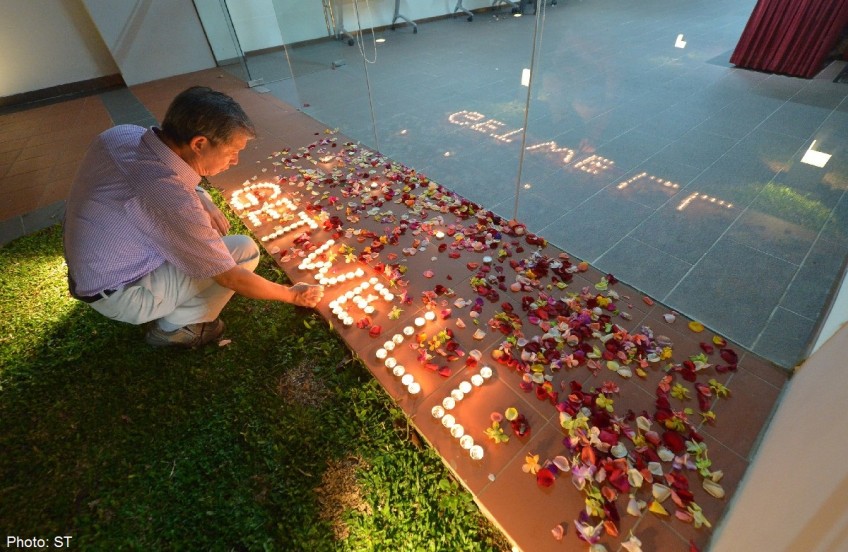 Special areas are being set up for well-wishers to leave cards, flowers and gifts for Mr Lee Kuan Yew, who remains critically ill in the intensive care unit of Singapore General Hospital (SGH).

The hospital yesterday designated an area outside Block 7 for these expressions of concern, in response to people trying to leave them with hospital staff or in the building's public spaces.

Grassroots leaders at Tanjong Pagar GRC, where Mr Lee is an MP, have also set aside the Tanjong Pagar Community Club art gallery as a space for residents to place get-well cards and gifts.

More than 100 residents have left cards at the gallery, which will be open over the weekend from 9am to 10pm.

By last night, about 80 cards and gifts had been left at SGH's designated area for Mr Lee, 91, who was hospitalised on Feb 5 with severe pneumonia.

Concern over his health has escalated since Tuesday, when the Prime Minister's Office (PMO) said his condition had worsened.

Mr Patrick Ang, 41, who has cerebral palsy and uses a motorised wheelchair, travelled from Clementi to leave a card. He said Mr Lee helped him move to a new flat after he was robbed in his Jalan Bukit Merah rental flat in 2012.

Mr Ang, who sells Singapore Sweep tickets, had written to Mr Lee for help through the PMO.

Within two weeks, Mr Ang was moved to a new rental flat of his choice in Clementi. He said: "If not for Mr Lee, I would still be living in the other flat."

A group from social enterprise Positive Intentions, which helps disadvantaged groups get back on their feet, came with flowers and placards covered with sticky notes. They had spent two hours outside Ngee Ann City getting 200 people to write good wishes for Mr Lee.

Real estate agent Kathy Ng, 53, left a daisy and a card for Mr Lee, saying she cried on Wednesday after seeing an announcement of Mr Lee's death, which later turned out to be a screenshot of a hoax website with the false news.

Police yesterday said a male Singaporean student below the age of 16 is suspected of having created and circulated photos of the fake website, which bore the PMO logo. The student, who is believed to have operated alone, is assisting in police investigations.

In an update on Facebook yesterday, Mr Lee's son, Prime Minister Lee Hsien Loong, thanked people for their "good wishes and prayers" for his father, saying he was "deeply touched".

Posting a black-and-white photograph of himself as a child being carried by his father, PM Lee said he had been looking at old family snapshots.

"So many happy memories over a lifetime," he added.