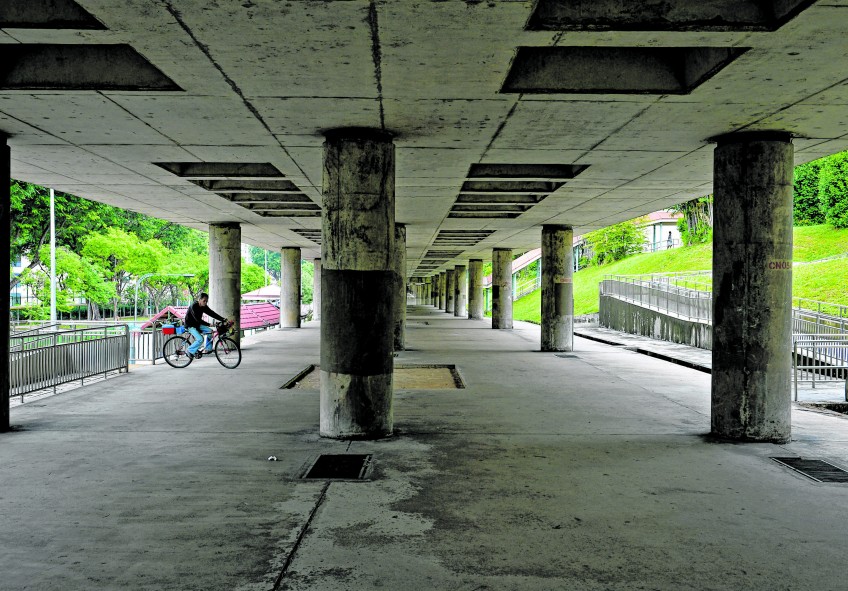 Cyclists under the MRT track on the north-south line near block 420, Ang Mo Kio Avenue 10, the section between Bishan and Ang Mo Kio MRT stations.

The corridor is one of several measures that the Government intends to roll out, to make Ang Mo Kio a model town that is both cyclist-and pedestrian-friendly.

The plans are slated for completion by 2018, said the Urban Redevelopment Authority (URA) and Land Transport Authority in a joint statement yesterday.

Part of the corridor will make use of under-utilised space under the MRT viaduct. There will also be features such as ramps and elevated flyovers - including one beside Ang Mo Kio station, which will run alongside the MRT track and over the busy traffic junction.

The plans also include dedicated bicycle crossings, possibly removing slip roads to make major junctions safer, narrowing roads to calm vehicular traffic, demarcating bus stops as areas where cyclists have to slow down, and carving out a 16km-long network of cycling and walking paths in the estate.

Taken as a whole, it is part of the $1.5 billion Sustainable Singapore Blueprint 2015 announced last month by Prime Minister Lee Hsien Loong.

Ang Mo Kio was chosen as a test bed for these ideas because it is a mature estate with little cycling infrastructure that is also close to several industrial and commercial areas where some workers commute by bicycle.

The ideas piloted in the town would demonstrate how steps can be taken towards the vision of a "car-lite Singapore", by promoting other modes of transport, said the authorities.

The new bike lanes will, for instance, take space from the road, pavement or grass verge, said the URA.

Transport experts that The Straits Times spoke to said this was a significant change.

"The readiness to take away road space is a major shift," said Dr Alexander Erath, a transport researcher at the Singapore-ETH Future Cities Laboratory.

"It signals a rebalancing of priorities from high-speed and highly polluting cars, to more spaceefficient and environmentally friendly bicycles," he said.

The corridor and bike network would make cycling more comfortable and convenient, and encourage residents to take to their bikes, he added.

Ang Mo Kio GRC MP Ang Hin Kee said the plans addressed the needs of residents who commute by bike to transport nodes to take the train or bus, by making it safer for them to do so.

Ang Mo Kio resident Darryl David, 44, who cycles about once a week, said the upcoming measures would encourage him to take to his bicycle more often.

"I'll be a lot happier if they made the town more cycle-friendly. It's a mode that combines transportation and fitness," said Mr David, an administrator at Temasek Polytechnic.

The proposed plans can be viewed at www.walkandcycle.sg from today and the public can give their feedback online.

A roving exhibition of the plans will also be shown at the town's community centres next month.

"We hope to hear from the residents on how they feel about the draft plans, and what we can do to encourage cycling and walking in the town," said URA chief executive Ng Lang.

This article was first published on Dec 31, 2014.
Get a copy of The Straits Times or go to straitstimes.com for more stories.