Platform barriers at all LRT stations by 2018 to prevent falls 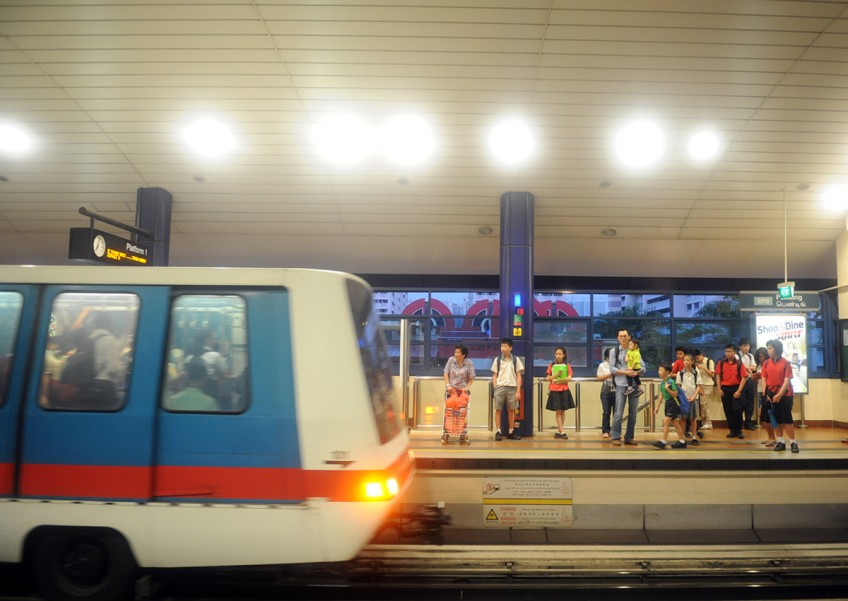 By 2018, all LRT stations will have glass and steel platform barriers in an effort to prevent people falling or getting onto the tracks.

However, unlike the barriers erected in overground MRT stations in 2012, the LRT structures will not have doors. Instead, they will have fixed openings with which trains will align their doors.

The Land Transport Authority has called for tenders for the project, which will involve installing the barriers at 42 LRT stations.

A spokesman said this was in response to rising passenger numbers. Last year, average daily LRT ridership stood at 137,000: almost three times what it was in 2004.

The LTA said the first barriers will be erected at the Bukit Panjang and Chua Chu Kang LRT stations, "in anticipation of higher commuter traffic with the opening of Downtown Line 2 at the end of this year".

This will be followed by the rest of the stations on the Bukit Panjang and Sengkang-Punggol LRT systems, with the work completed in 2017 and 2018 respectively.

"All works will be carried out during non-service hours to minimise inconvenience to commuters," said a spokesman.

Since 2010, there have been on average three LRT track intrusions per year.

The new barriers will not be totally secure as the tracks are still accessible via the fixed openings.

The LTA explained that, since LRT platforms are significantly smaller than MRT platforms, "the operation of platform screen doors will require power, communications and signal control rooms, which will take up a substantial amount of passengers' waiting space".

Commuter C.G. Ang, 57, said not having doors is "a half-baked solution".

"In some cases, it may be even more dangerous," he said. "For instance, if someone falls onto the tracks through the opening, rescue efforts might be impeded by the barriers."

National University of Singapore transport researcher Lee Der-Horng said the move "will enhance safety to a certain extent", but found it "a bit strange" that doors will not be included.

Screen doors were erected on all 36 overground MRT stations three years ago but commuters have complained that they can take a longer time to open, and may not be aligned properly with trains.

Platform barriers and screen doors are relatively rare in metro systems around the world though new systems tend to have them.

In Japan, where track intrusions are not uncommon, some cities have begun erecting barriers.