A plot of serenity on the edge of bustling city 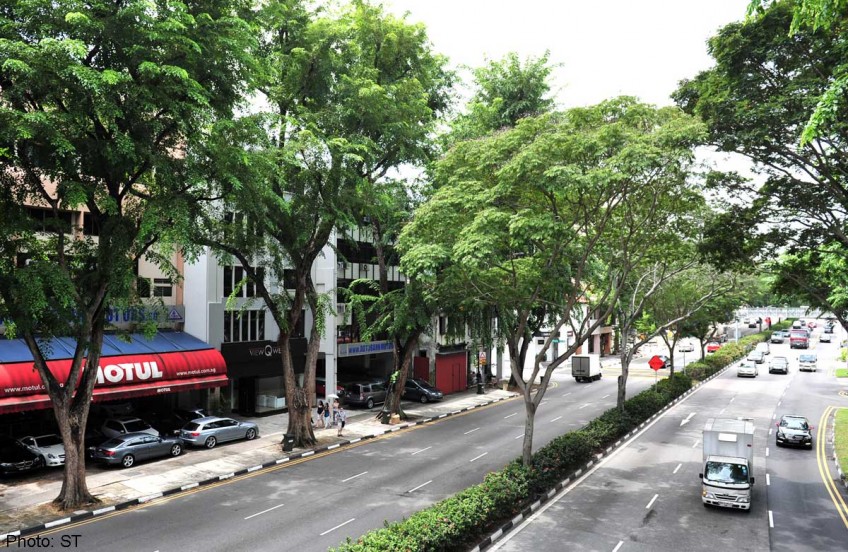 Autobahn Motors (centre), which has been in the area for 18 years, used to stock sedans from Mercedes-Benz and BMW but now handles high-end models such as Ferraris, Lamborghinis and Porsches, as the property prices of the area increased and the people became richer.

For a place just on the fringe of the city, the wedge-shaped slice of land, bordered by Bukit Timah Road and the Central Expressway, is surprisingly serene.

The Rochor River runs at an angle to the small estate, closing the neighbourhood near the popular Newton Food Centre off to the outside world.

One road in the area is Makepeace Road, named after journalist Walter Makepeace, who managed the Singapore Free Press until 1926. Makeway Avenue, its less-famous "twin", runs parallel to it.

"What you see is what you get... It's a small road with very few houses, so not many people come here," said Mr Victor Tan, adding that the quiet street, with its double row of refurbished terraced houses, was what attracted him to the estate almost a decade ago.

Mr Tan, who is in his 70s, has lived in a refurbished terraced house in Makepeace Road for nearly 10 years. He says he treasures the area also for its proximity to town. "It's very, very rare to get a landed (property) in the central area," he said.

Retired teacher Chan Yut Ming has lived in the neighbourhood for most of her life.

When she was 22, she moved into her in-laws' house in Jalan Aruan, which is near the river. "But I wanted my own place," said the 73-year-old. So when the opportunity arose in her 40s, she moved again, just down the street.

"It's very quiet here, very peaceful," said Madam Chan, adding that her only gripe - a very Singaporean one - was the lack of parking spots in the estate.

"People who are not residents park here all the time and there are not enough parking spaces for us."

While the neighbourhood is probably familiar only to its residents, the stretch facing Bukit Timah Road is known for a branch of the famous Teck Kee Tanglin Pau.

The area is also home to the 169-year-old Chui Huay Lim Club - an exclusive recreation venue for Teochews only, and car dealership Autobahn Motors.

The latter has probably caught the eye of more than a few car enthusiasts with its stock of exotic luxury cars.

Its showrooms boast high-end models like Ferraris, Lamborghinis and Porsches, although this was not always the case.

Once upon a time, said general manager Gary Hong, four-door sedans from brands such as Mercedes-Benz and BMW were most popular. "But over time, the properties here became more expensive, and the people became more successful, and they started to look for more distinguished cars," he said.

Mr Hong is one of four brothers who run the showroom, which has been in the area for 18 years.

Now, two-door coupes and convertibles are all the rage, and these are what the brothers bring in.

"We move along with the requirements of the times," Mr Hong said.

Residents and shop owners say that landed properties in the area have been sold en-bloc to make way for new developments such as condominiums.

"This place has changed a lot," said Mr Ong Thiam Soon, 54, who runs a provision shop next to Teck Kee Tanglin Pau. "Over there, behind the petrol station - that used to be a temple." He indicated a mansion across the road, surrounded by a thick cluster of trees.

"But the new owners of the land tore it down and converted it into a house," he said. "And next door, there used to be four or five shophouses. But now, it's being turned into an embassy." Hoe Bee Company has been in the area for more than 30 years, but it has been in operation for far longer.

Before it was forced to relocate, Mr Ong's father ran the business in Orchard Road for about 20 years.

"Now, with places like Giant and FairPrice, the provision shop business isn't easy," Mr Ong said. Much of the store's income comes from a few varieties of coffee beans, which are ground on the spot and mixed according to customers' preferences.

Mr Ong's children will probably not be taking over the business from their father.

But he is not likely to throw in the towel any time soon. "Retirement would be boring," he said, smiling. "Working here gives me - and my father - something to do."

It's very, very rare to get a landed (property) in the central area. - Mr Victor Tan, in his 70s, has lived in a refurbished terraced house in Makepeace Road for nearly 10 years