PM to actively push for succession in new Cabinet line-up 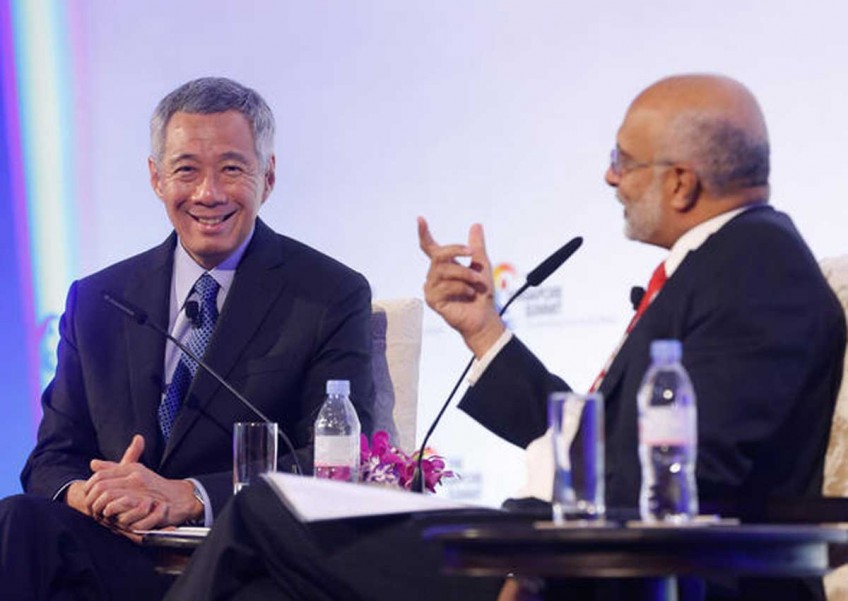 Prime Minister Lee Hsien Loong has signalled that he plans to move decisively with leadership succession in forming his new Cabinet.

The Government and people do not want to be in a position where the front bench is greying and people ask what happens next, he said.

"That means you have to plan for succession very consciously, deliberately, and push it aggressively," he told 400 policymakers and business leaders at the Singapore Summit at the Marina Bay Sands yesterday.

He recalled how first prime minister Lee Kuan Yew had colleagues who said: "But we're still not old, why are you doing this?"

PM Lee, 63, said: "Between me and my colleagues, we all know that we're not old, but we're not getting younger. Therefore we have to push it aggressively, and that's what I'm intending to do when I announce my new Cabinet."

He is expected to name his new Cabinet over the next fortnight.

Leadership renewal was a key message of the People's Action Party in the Sept 11 General Election, and dialogue moderator Piyush Gupta, who is DBS Group's chief executive, asked PM Lee why he seemed to be in a hurry to retire.

Mr Lee replied that he wants to continue the system of having leaders who are well prepared, where the transition is seamless, and everybody is assured Singapore is well taken care of not just for the next five years, but the next 10, 15 years.

And active succession planning is key, even though he and his current team of ministers can keep things going for another five years.

PM Lee was also asked whether he was surprised, relieved or vindicated by the election results, which saw the PAP win 83 out of 89 seats and get 69.9 per cent of the popular vote, a near-10 percentage point swing from the 2011 elections.

He said he was surprised and relieved. But he would not use words like vindicated, as "you only know you're vindicated after 100 years have passed". As for what led to the election outcome, he said the PAP will study it but it was hard to say for sure. But it seemed that voters approved of what the PAP Government had done over its past term and wanted them to continue on the same track, he said.

The opposition's storyline, he noted, was "the Government is doing good; you vote for us, the Government will work even harder". "That's a very dangerous approach and it goes against human nature," he said. "If you have a friend and your friend is nice to you, you're nice to him or her.

"Most Singaporeans agreed with us that the way to build a relationship and develop close bonds for the future was to work with the Government. The Government fully intends to honour that and to work with the people and to engage them in the decisions which we have to make, going forward."

As for whether the results validated the shift to the left in social policies, Mr Lee said he did not see this as "more welfare or less welfare".

Rather, the Government tries to address specific sources of anxiety, such as housing and jobs. But aspirations are hardest to meet, he said, for new ones emerge even as old ones have been fulfilled.