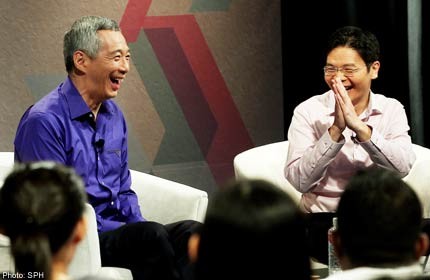 Prime Minister Lee Hsien Loong (left) and Acting Minister for Culture, Community and Youth Lawrence Wong at a dialogue involving some 60 youths on 22 August 2013. The 90-minute talk was held at the LaSalle College of the Arts campus.

Here are some of the questions PM Lee tackled at the Lasalle College of the Arts:

Q: I notice that there is some aspirational inequality among my peers. There are some who truly aspire to be who they want to be. Others are resigned to their fate. Is there any way to reduce this inequality?

PM LEE: We would like Singaporeans to grow up to dare to dream. They must prepare to work, study, and with talent, can reach for the stars. And I think that dream is alive and well. I don't know what sense of a group you have, but I know that when you look at the students in institutions, all the students want to continue to study. Those who are in polytechnics, many of them want to go to universities. Those who are in ITEs would like to go on to a poly. And in fact, a significant number of them do succeed in doing so. And even those who are in the workforce, a good number are studying for degrees. They sign up for courses. They go for night classes. They take exams. Even people in their 40s and 50s are still doing that. They have to take care of their kids, and when their kids are asleep, they slog it out. So I don't think Singaporeans are lacking in the desire to upgrade themselves. But what we need to do is to make sure that the avenues are open. They want to do it, they can do it. The courses are available. Socially, we encourage them.

Q: In Singapore, where the rates of singlehood and divorce are rising, is it realistic to base housing policies on a dual-income assumption?

PM LEE: I think for us to work on a basis that most people are married is still valid. We have a significant minority of singles and we have to cater for them and we are in fact catering for them. The Housing Development Board has just opened up to sell flats to singles. There's a huge demand but I think that's pent-up demand. As we build more flats, we'll be able to meet the demand. We'll get back into balance. For other families, some are dual-income and some are not. Whether single or dual-income, probably 70 to 80 per cent of the population would be able to hit $2,000 for a three-room flat, and easily more than half the population would be able to hit $4,000 for a four-room flat. So I think it's affordable.

Q: During the NDR speech, I was looking forward to a stocktake of how far we have come. Is it time for a mid-term report card on the Government's performance at the halfway mark, since the General Election in 2011?

PM LEE: (Laughs) Students never give themselves report cards, we wait for the teacher. I will not try to give myself a grade but a lot of things which we set out saying we want to do... these last two years have been busy years. Where there's housing, health care, public transport. The ministers have been working hard. Of course, from the point of view of a person who's waiting for his flat, the flat hasn't arrived yet. But there are fewer people waiting today than two years ago.

Q: How do you remain so positive on your Facebook page, given that there are not so many kind people online?

PM LEE: You must believe in what you're doing. If you're doing something which you believe is right, worth doing, then even if there are some naysayers, you must decide whether you've got the majority with you or not. If not, you have to try very hard to persuade people. There will always be naysayers - that's the reality. If you want to do something for Singapore, for the population, you should not be deterred because there are some nasty postings. When you are in the public eye, you flame me, I'm flameproof.

Q: Will doing away with the T-score for PSLE result in weaker youth who can't stand up to competition?

PM LEE: We are doing away with the T-score but it doesn't mean we are doing away with grades or with results. It's not a pass-fail exam. We have to have the right balance. We are a competitive society. We do want to get ahead. I don't think we are in danger of sitting back under a coconut tree and relaxing. And I think we should help our children in school set a right balance. They are under a lot of pressure. Some pressure to work hard in school is good, but it must be the right sort.