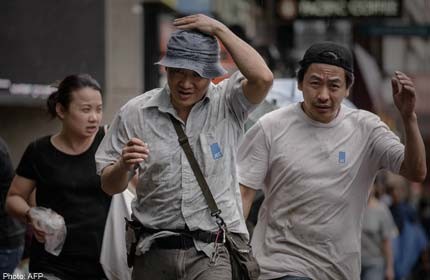 Pedestrians walking against strong winds in Hong Kong on August 13, 2013.

Earlier the same day, Hong Kong Chief Executive Leung Chun Ying sought to make himself heard at a grassroots townhall meeting in Kowloon. Outside, six protesters were arrested for rowdiness.

A few days earlier, the leader had found himself having to debunk insinuations of triad links, after gang members were nabbed in a clash between his supporters and the pan-democrats' camp.

Fighting such fires while mired in governance quagmire is part of what is becoming a worryingly typical week for the Hong Kong government - a state of affairs that leaves many people here angry and exasperated.

It is thus little wonder that Sunday's National Day Rally (NDR) prompted comparisons between the two cities and a fresh bout of soul-searching in Hong Kong.

Yesterday, 15 - nearly all - of the famously polarised and freewheeling newspapers here devoted extensive coverage to PM Lee's announcements, with three putting the news on their front pages.

In a scathing commentary, the leading Ming Pao Daily News wrote: "Looking at Singapore's detailed strategies, Hong Kongers feel frustrated not only because we are being left behind, but also because we cannot see where we are heading to and how. Hong Kong is stuck in political mud, mired in endless internal clamour."

But it is in Hong Kong - both a rival financial and port hub and a close partner with which Singapore works and has much to learn from - that the coverage was almost personal, tinged with some despondency and also envy.

Explaining this, Hong Kong University political scientist Peter Cheung, a reputed academic who has always chosen his words carefully, says: "Singapore has always been our benchmark. And there is a great sense of frustration about why Hong Kong has reached this stage of predicament. It's not a Hong Kong that we know, that we're comfortable with.

"We are daydreaming here (of what Singapore plans to achieve). To buy a home after four years of working? Impossible!" Professor Cheung was referring to National Development Minister Khaw Boon Wan's vow that new flat prices will be at "four years of salary".

To be fair, Mr Leung, by many accounts a well-meaning and ambitious leader, had laid out in his maiden policy address in January various measures to resolve Hong Kong's challenges, including its intractable housing problem.

Since then, however, his government has demonstrated an unerring predilection to lurch from one political quicksand pit to another, from conflict-of-interest rows embroiling senior officials to a lack of sensitivity in handling tinderboxes. (Latest case: Mr Leung's over-reaction in dealing with a foul-mouthed teacher.)

This hampers efforts to build consensus to move on tough policies. It also does not help that in the current flawed political system, the Chief Executive has no popular mandate and legislators have little incentive to support him. Meanwhile, the aggressive media is poised for attack.

In this environment, different parties, in looking for possible takeaways from Singapore's NDR, will seek out their own messages.

For instance, the Oriental Daily News, known for its stance against the Leung government, lambasted it for having feet of clay in an article headlined "S'pore makes quick, bold changes while HK bites the dust".

Meanwhile, the English-language South China Morning Post and Ming Pao said this was an argument for universal suffrage in Hong Kong, noting that the People's Action Party was responding to public sentiments following the bruising 2011 General Election and its subsequent by-election losses.

But the underlying message is clear: Singapore, a competitor, is moving fast, says Prof Cheung.

Recalling the high approval ratings Mr Leung had before taking office - this prompted Beijing to switch its support from rival Henry Tang - he added: "The sad thing is, no one expected the CY administration to come to this. It will be a difficult year ahead for Hong Kong."

The airport's capacity is to be doubled, public health insurance will cover pre-existing illnesses and the government will make housing more affordable, all without much argument.

This may be true in Singapore, where the government has just announced these plans, but not in Hong Kong. Similar questions have prompted debate here about environmental impact, welfarism and a stable property market.

Critics of Singapore's way of doing things say it lacks the lively public debates in political forums and a diverse media - and challenging of government policies - that have become an important part of Hong Kong's political scene. Defenders say it has become better at getting big things done - a quality Hong Kong has traditionally prided itself on.

So long as conflict between our officials and lawmakers are blamed for frustrating progress, and lawmakers bicker among themselves, Hong Kong risks such comparisons.

The latest have been prompted by Singaporean Prime Minister Lee Hsien Loong's annual National Day Rally policy address. The centrepiece was the expansion of Changi airport.

"The question is do we want to stay this vibrant hub of South-east Asia, or do we want to let somebody take over our position, our business and our jobs?" he said.

This resonates with a comment by former secretary for commerce and economic development Frederick Ma Si Hang, that it is time for Hong Kong to look beyond micro issues and focus on how to move forward with big projects, as it did by building an airport in the 1990s, before it is overtaken by fast-growing economies such as Singapore's.

Media coverage in other places

- Oriental Daily News calls it an "ambitious blueprint", adding it is little wonder that experts believe Hong Kong will be overtaken not just by Singapore but also by Guangzhou, Zhuhai and other cities in the Pearl River Delta.

- United Daily News reports that PM Lee pledges to help Singaporeans earning as little as NT$23,000 (S$1,000) to buy their own homes.

- News portal okezone.com's headline notes that the new terminal would double the airport's capacity to defend its position as a regional air hub.